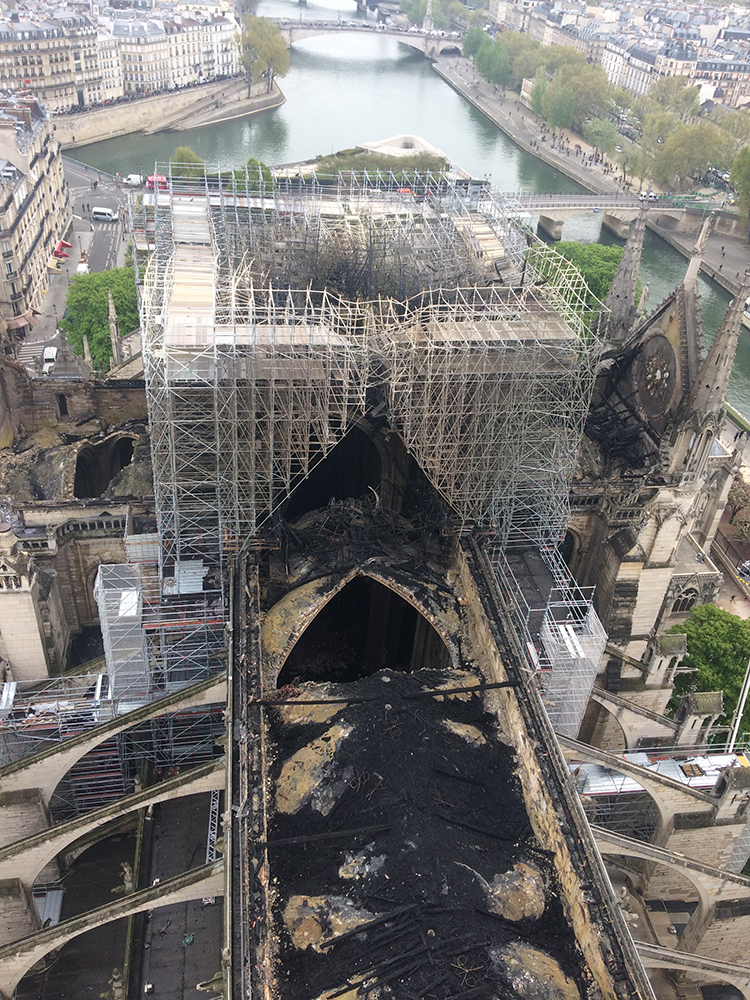 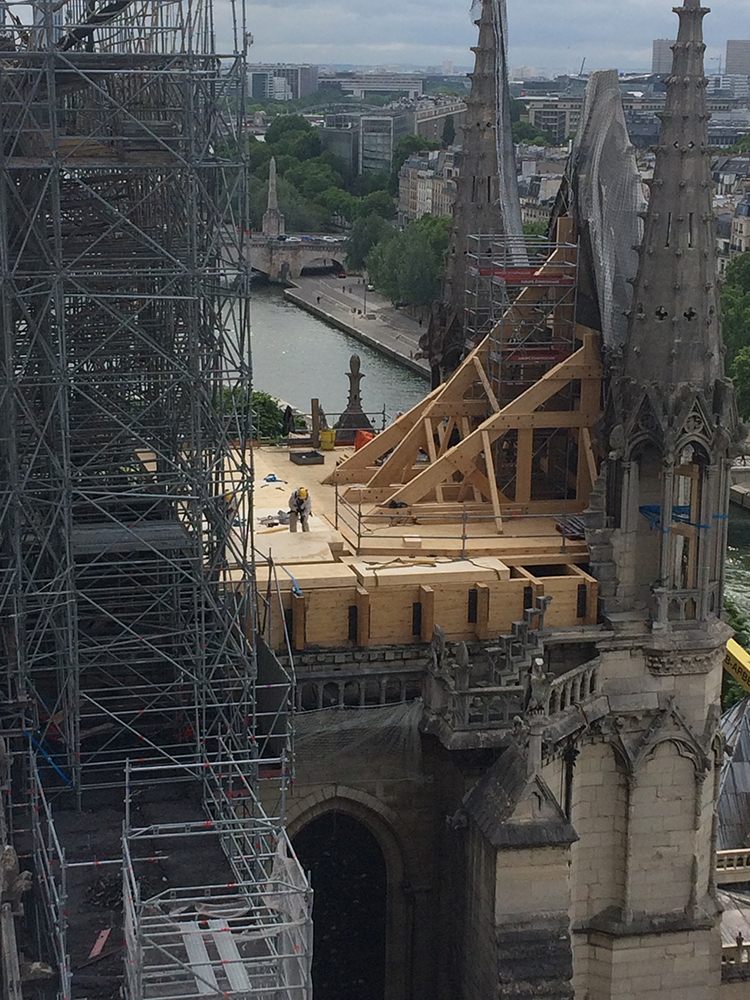 Shoring up the south gable of the transept
© Philippe Villeneuve 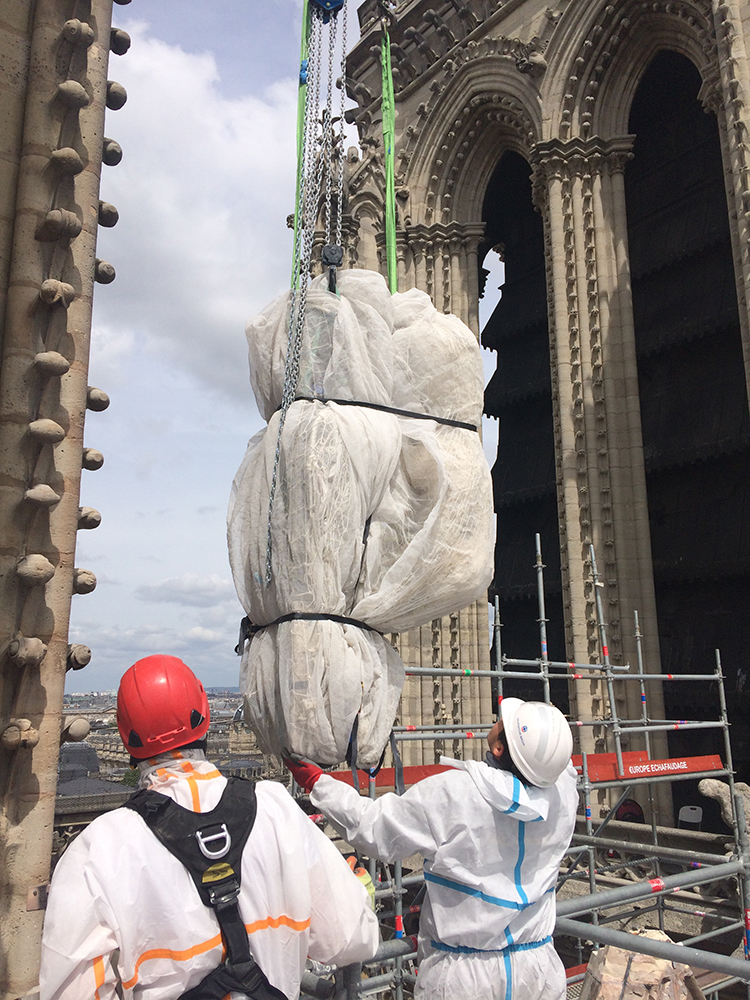 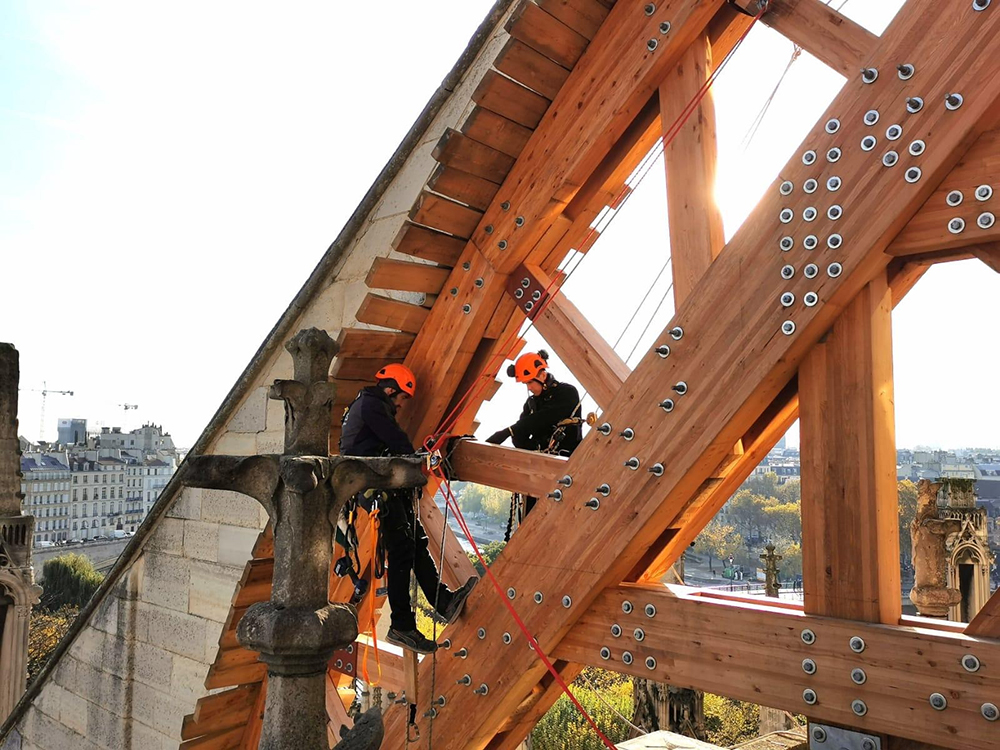 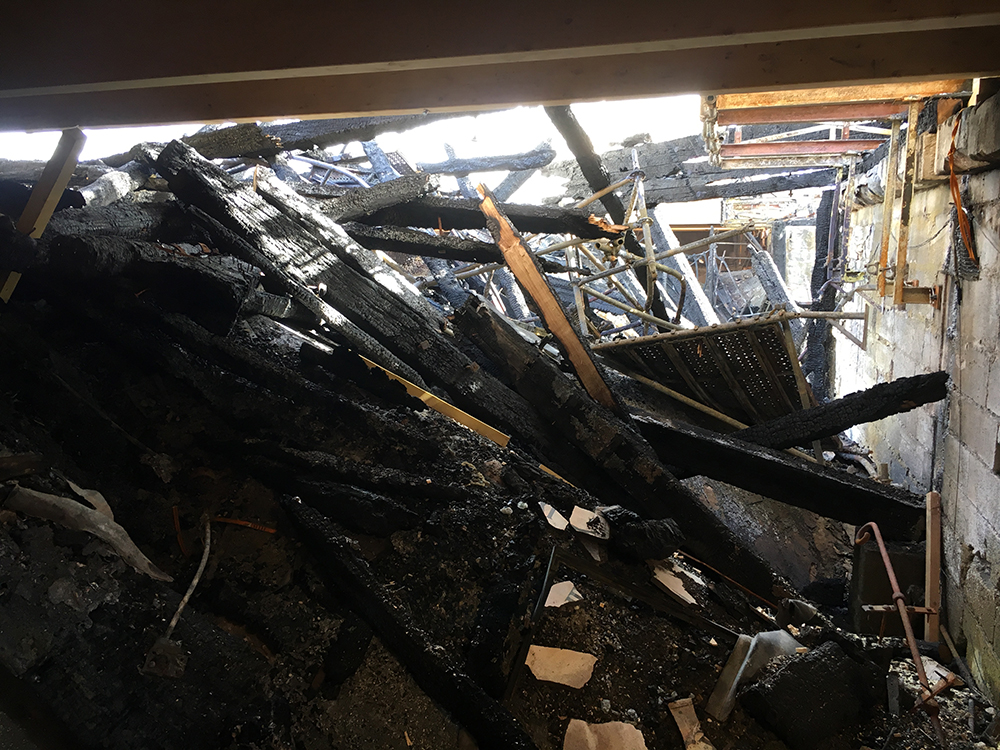 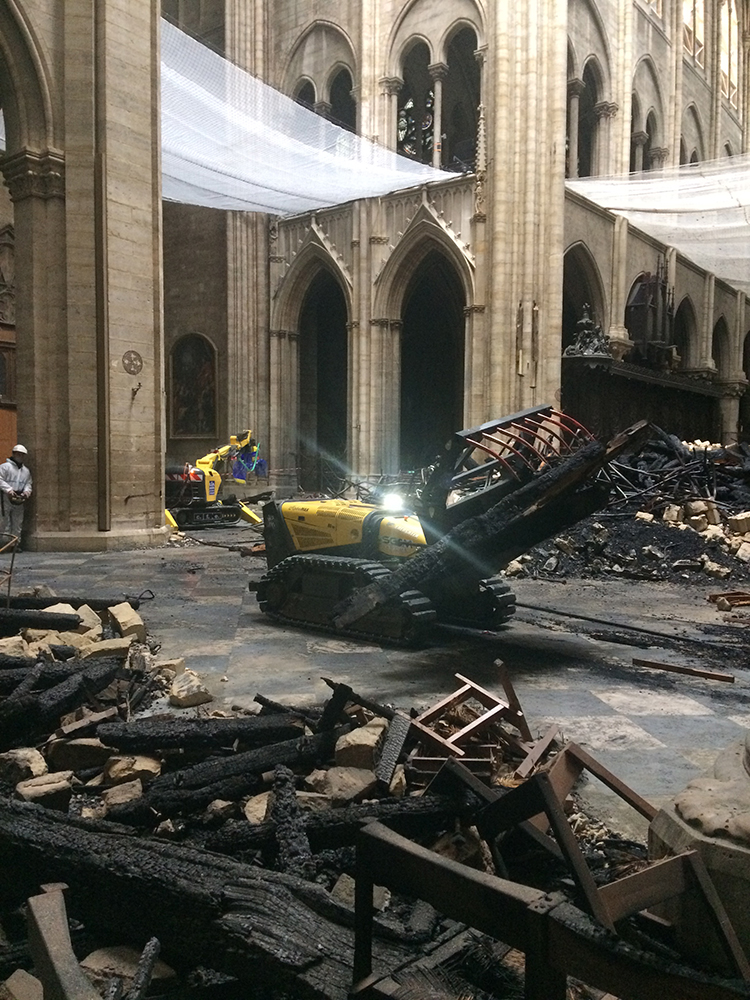 Bad weather emergency. 150 workers are racing against the clock because rain is forecast in three days time. They stretch tarpaulins from wall to wall over the nave, the transept and the choir, above the stone vaults overloaded by charred timbers. However, the cathedrals’ crossing remains exposed because it is cluttered with scaffolding that had been erected earlier for the restoration of the spire.

Emergency public safety. The cathedral’s high-level masonry work is covered with nets to safeguard against falling stone. The gables on the north and south end walls of the transept were heavily affected by the fire, and are in danger of collapsing. They are therefore supported by a "sandwich" that is anchored on the inside to a wooden buttress that is mounted on temporary floors, which have been placed by cranes on the top of the walls. First of all, the statuary that had crowned the gables, as well as the fragile statues on the south tower, are wrapped in a protective covering of canvas and polystyrene and removed from the building by crane.

Structural emergency. The disappearance of the cathedral’s heavy timber-and-lead roofing in the fire destabilized the balance of the vaults. In just four months’ time, customized supporting arches are built to counterbalance the 28 buttresses. The stability of the stone vaulting is in a precarious state because they were overheated by the blaze; the burning roof structure rained down upon them, and they became overloaded by waterlogged timbers soaked by the fire hoses. The upper level of the cathedral is made accessible by temporary floors, to which workers are suspended, and begin removing the collapsed timbers and the lead sheets, one-by-one. Below, workers use a remote-controlled robot to recover the timbers of the spire and stones of the vaults that had collapsed to the ground. Each piece is identified, catalogued and stored in large temporary sheds that have been erected on the plaza in front of the cathedral.

The scaffolding put in place for conserving the spire was supported on the four corners of the transept crossing. During the fire, the metal scaffolding overheated and became welded, thereby slowing the collapse of the spire. If the scaffolding had collapsed, the vaults and walls that supported it might have collapsed in turn. To stabilize the existing scaffolding structure, a second supporting layer of scaffolding is erected externally and internally. This is executed with infinite care in order to avoid even the slightest movement. The dismantling of the old scaffolding is then patiently and meticulously carried out, member-by-member, by workers suspended from the new scaffolding.

Heritage emergency. The high stained glass windows are removed and transparent tarpaulins are stretched over the window openings. The cathedral’s organ is insulated and dismantled piece by piece to be decontaminated of dust and soot in the workshop, before it is reassembled.

In mid-November 2020, after 19 months of patient work carried out day and night without interruption and under drastic conditions, the roof space was cleared and cleaned, and the scaffolding of the crossing was removed. Finally emptied of rubble, the building was entirely covered with tarpaulins and made as safe as possible. Keystone of the crossing © Benjamin Mouton 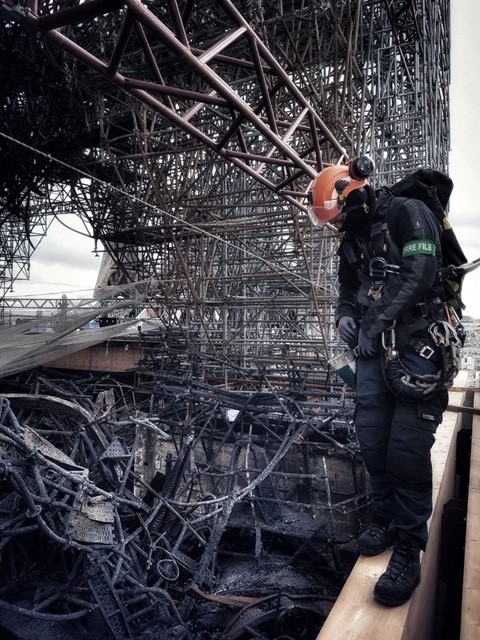 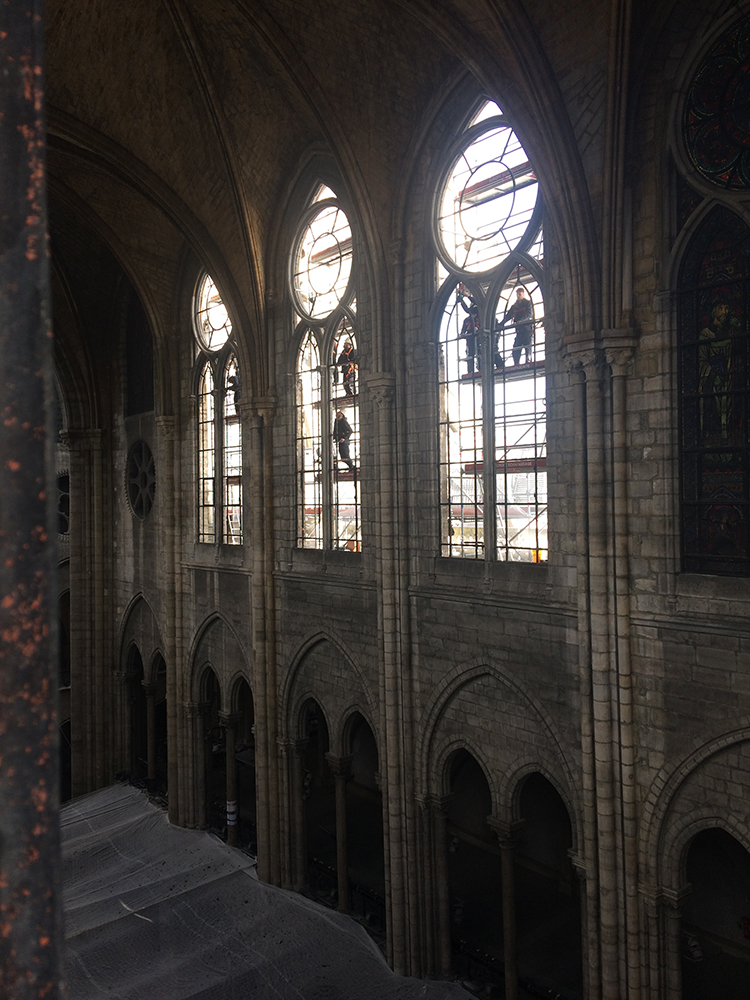 Protection of the bays
© Philippe Villeneuve

Chapter 2  The Creation of a Public Institution 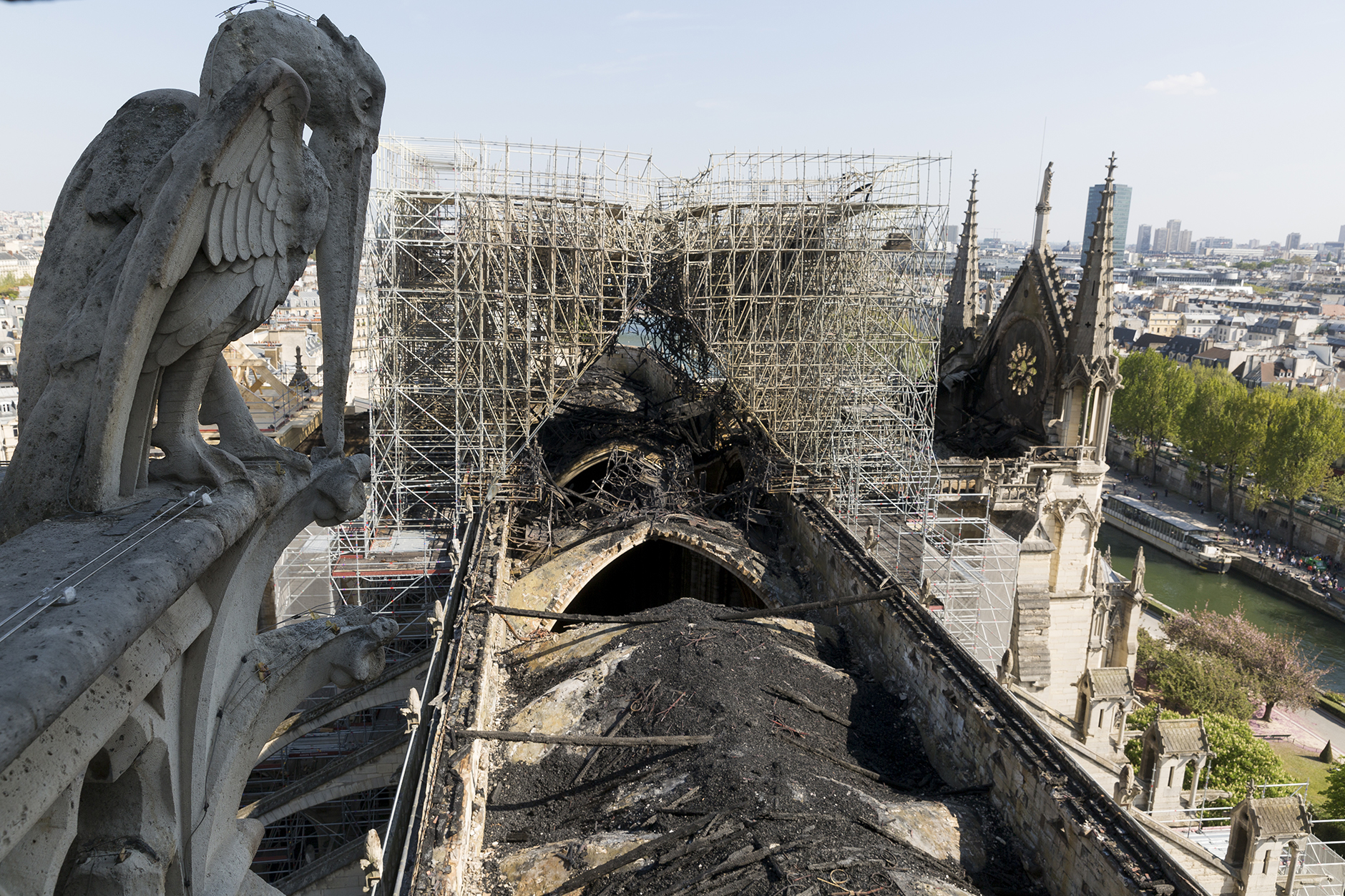 View of the burned frame and roof above the nave. You can see the hole in the vaults caused by the fall of the spire and the remains of the scaffolding welded together by the heat of the fire. © C2RMF, Alexis Komenda, 2019. The scaffolding, installed for the restoration of the spire, after the fire. Its dismantling, piece by piece, proved to be long and perilous. © C2RMF, Alexis Komenda, 2020. Initially, the regional services of the Ministry of Culture assumed responsibility for the smooth running of the operations to secure the building, which was in imminent danger. As contracting authority, they would orchestrate and facilitate the operational work of the project management, placed under the responsibility of the chief architects of historic monuments.

In the same time, two days after the fire, in the assembly of the Council of Ministers on 17 April 2019, the President of the Republic appointed the Army General Jean-Louis Georgelin as.

On December 1, 2019, in accordance with the law of July 29, 2019 a Public Institution dedicated to the conservation and restoration of the cathedral Notre-Dame de Paris was created and placed under the direction of General Georgelin. From then on, he will be in charge of the project.

The public administrative institution has a scientific council and a donors' committee, and it is placed under the supervision of the Ministry of Culture. The body works with all partners who have legitimate rights to intervene in the decision-making processes and it is responsible for ensuring their cohesion. These partners include the State, which is the public owner of the building; the clergy, who continue to use the cathedral, and the City of Paris, which manages its surroundings.

The public administrative institution fulfills a triple mission: it is the contracting authority for the security operations and restoration works with the aim of completing the task in five years, as decreed by the President of the Republic; it promotes the site as a place for the expression and transmission of building-craft knowledge, which is essential to the conservation of heritage; and finally, because the work is financed by public generosity, and in particular through a national fund-raising, the body regularly informs the general public and donors about the progress on site.

The exceptional mechanism that was put in place to ensure the restoration of Notre-Dame de Paris is unprecedented in its scope and ambition, as well as in its willingness to place at the heart of heritage the men and women who ensure its transmission, and the public, whose common property it is. It thus constitutes an important case study for reflecting on the ways that heritage disasters around the world might be better managed and more inclusive of the concerns and perspectives of the general population. 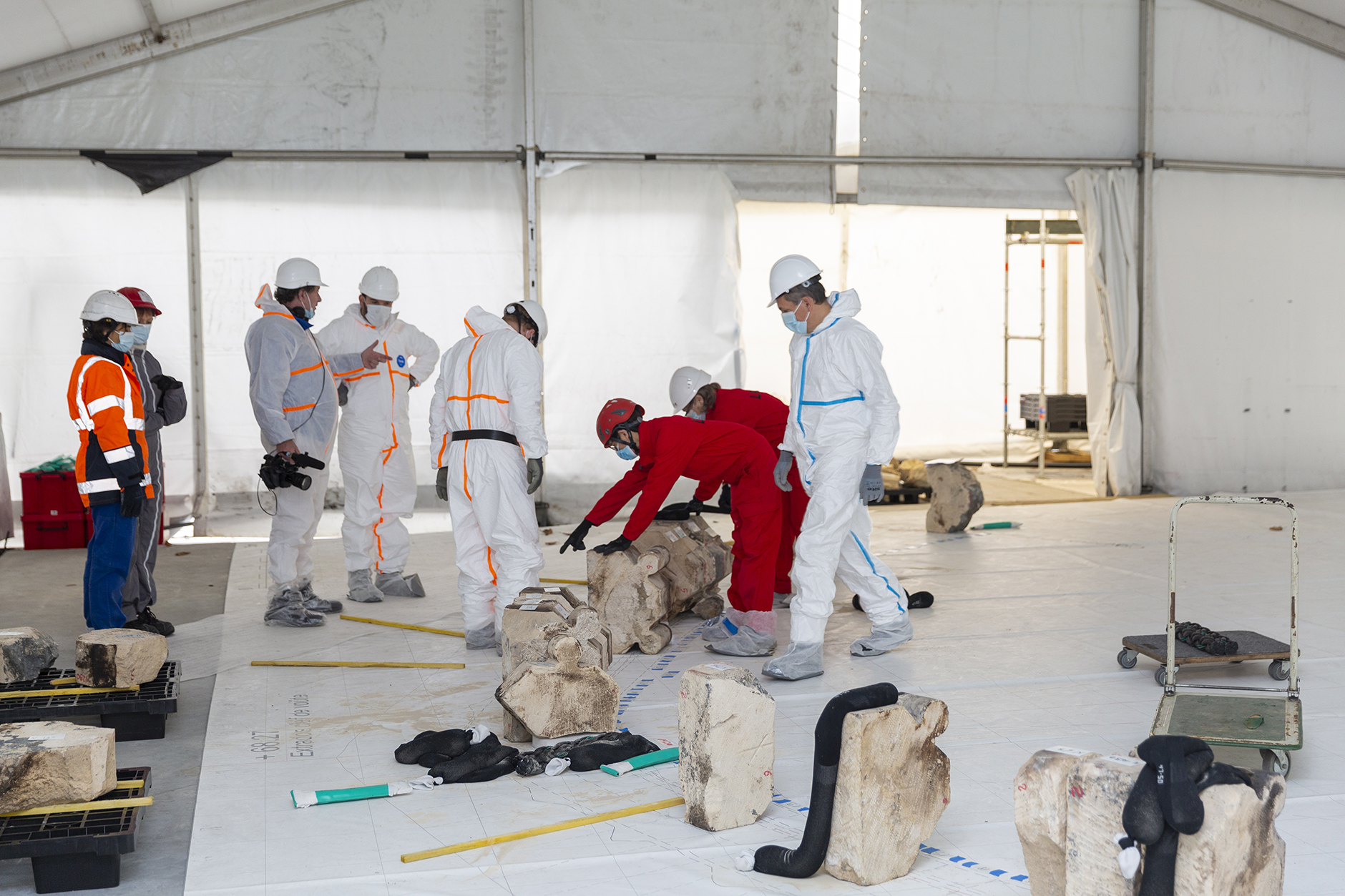 The reconstruction of the double arch, under the barnums of the square. © C2RMF, Alexis Komenda, 2020. 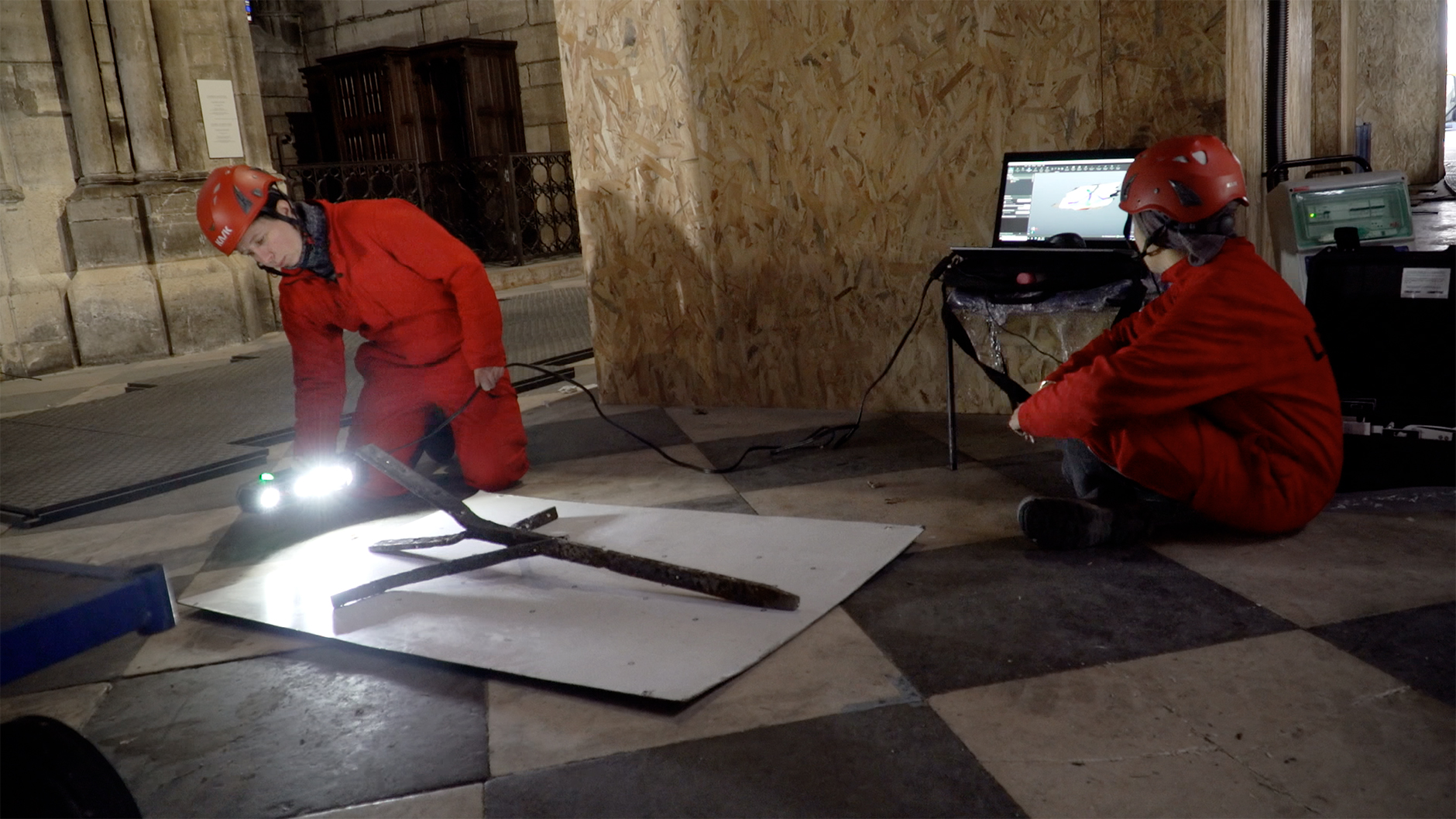 Along with the millions of people who witnessed the tragedy at Notre-Dame de Paris on the evening of 15 April, either gathered along the quays of the Seine or on television screens, scientists, too, were stunned by the event. The need for action and participation in a salvage operation was immediate. An association of scientists working for the restoration of Notre-Dame de Paris was therefore created the following day. It proposed to make existing scientific knowledge about the cathedral available to the authorities and to gain better understanding of the building’s original structure, which until that point remained largely unknown.

In the meantime, the Ministry of Culture research services were already on site to assess the damage and to establish a protocol for removing of rubble that would take into account the scientific value of damaged materials. Even in their burned state, these materials could provide valuable insights into the cathedral’s construction and answer important questions: What is the proportion and the composition of the mortar in the walls? What is the role and the origin of the iron reinforcement used in the masonry? What can the timbers in the framework tell us about the climate during the 13th century? When and how were the stone vaults constructed?

The National Center for Scientific Research (CNRS) and the Ministry of Culture quickly decided to collaborate in the creation of a vast scientific workshop that would combine their respective desires for action, skills and knowledge.

Today, that workshop brings together more than 175 researchers from some 50 laboratories across France. The researchers belong to different disciplines and most have never before worked together. They are grouped around eight major themes: stone, wood, metal, glass, structure, acoustics, digital data, and social emotions and mobilizations. All of them are working with a double objective: to deliver the knowledge and expertise needed at the restoration site; and, to turn the trauma caused by the fire into an opportunity for surveying the cathedral more closely and improving our knowledge of its materials and their arrangement, as well as of its more intangible dimensions and exceptional cultural qualities.