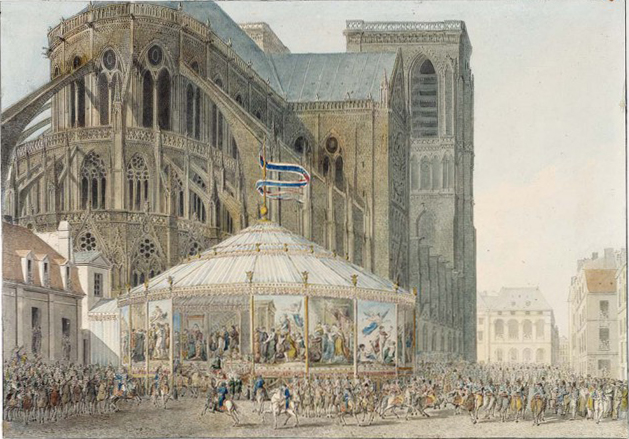 The return to Catholic worship

The Gothic cathedral underwent relatively few modifications until the 18th century. It was then that the liturgical choir and the sanctuary were completely renewed with the installation, completed in 1725, of a new altar. The altar was adorned with the sculpted group of the Pietà by Nicolas Coustou, set between the kneeling statues of Louis XIII and Louis XIV. The sculpture commemorates the "Vow of Louis XIII" by which this king, in 1638, had placed the kingdom and its crown under the protection of the Virgin. In the following decades, the walls were whitewashed and the stained glass windows of the Middle Ages were removed in favor of white glass. Only the three large roses escaped destruction.

The revolutionary episode was to endanger a building that had remained in function uninterruptedly since its construction. The cathedral was closed to Catholic worship from November 7, 1792 to August 15, 1795. During this period, it was transformed into a temple of Reason for the celebrations of the revolutionary cult. The monument was struck by vandalism with the destruction of all the signs of royalty, in particular the 28 statues of the Gallery of the Kings and almost all those of the doorways of the west facade as well as the transept. The debris was only removed from the square in 1796. Spectacular discoveries in 1839 and, more recently, in 1977, allowed the recovery of suggestive fragments of the cathedral's statuary decoration, now exhibited in the Musée de Cluny.

Even after the re-establishment of Catholic worship, its ministers had to share the cathedral with the theophilanthropists, who were allowed to worship in the cathedral, occupying the choir, while the Catholics moved to the north arm of the transept.

It was only at the beginning of the 19th) century, under the Consulate, that Notre-Dame regained its full function as a temple of Catholicism with the entry into force of the Concordat signed with Pope Pius VII. On April 18, 1802, to mark the event, a great ceremony was celebrated at Notre-Dame in the presence of the new bishop, Monseigneur de Belloy.

It was obviously the sumptuous ceremony of Napoleon's coronation celebrated in the cathedral on December 2, 1804, that saw the cathedral renew its ties with the great hours of national history. The renovation and decoration of the cathedral, entrusted to the architects Percier and Fontaine, made it possible to accommodate approximately 10,000 people, twice the contemporary capacity, thanks to a system of superimposed tiers installed in the aisles and the galleries.

The pope anointed the emperor who crowned himself before placing the diadem on the head of the empress Josephine, a scene immortalized by the painter David. These rites took place in the choir and were followed by the taking of the constitutional oaths, for which the emperor returned to his throne perched at the top of 24 steps in the nave, while the pope went to the sacristy.
The following years saw the multiplication of Te Deum ceremonies in honor of political power, every August 15, Napoleon's birthday, which corresponds to the feast of the Assumption, celebrated with splendor since the Middle Ages at Notre-Dame, or to mark the military victories of the emperor. This national dimension, which revived an age-old tradition, has continued to this day.