Chapter 1  In the great hours of History 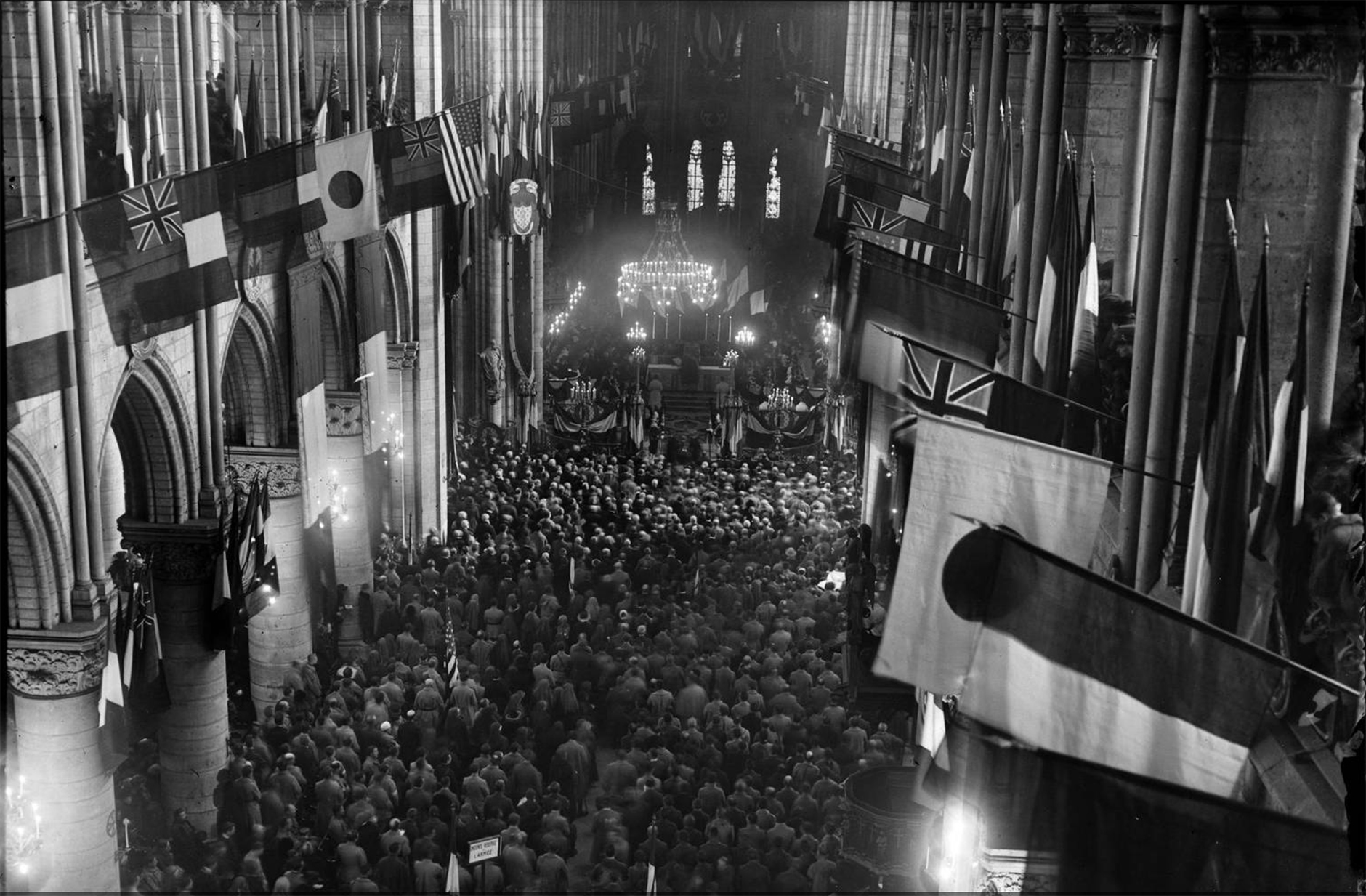 The celebration of the liberation of Alsace-Lorraine at the end of the First World War. Celebration of the "Te Deum" of the victory in the Notre-Dame cathedral. Paris, November 17, 1918. Photograph published in the Excelsior newspaper on Monday, November 18, 1918.

After the law of separation of Church and State in 1905, responsibility for Notre Dame Cathedral was split; the building, classified as a historical monument since 1862, remained the property of the State, while the Church of France used it for liturgical worship. The Church as an institution remains in control of its ceremonies, from the beatification of Joan of Arc in 1909 to the 850th anniversary of the cathedral's founding in 2012-2013. However, its position in the heart of Paris, the nation's capital, also allows the republican state to summon, when necessary, the Catholic heritage of the "very Christian monarchy”.
This national dimension was now the result of a political transaction. Thus, on November 17, 1918, Cardinal Amette, Archbishop of Paris, organized a Te Deum for the victory at Notre-Dame and invited the most senior figures of the State to attend; but the President of the Council, Georges Clemenceau, considered to be the architect of the victory, refused to participate in the ceremony! In 1929, on the other hand, the funeral of Marshal Foch took place in the cathedral.

The religious function of the sanctuary did not disappear: on May 19, 1940, the President of the Council, Paul Reynaud, and several ministers attended a mass organized at Notre-Dame to pray to God to grant victory to the country... And on May 21, 1944, under the moribund Vichy regime, Cardinal Suhard still had time to consecrate Notre-Dame "Queen of France and Peace".
In the 20th century, the effects of the nationalization of the cathedral, both unfinished and ambiguous since the French Revolution, are still being felt. Notre-Dame performed this national function to the detriment of other "secular" sanctuaries, such as the Pantheon, which had difficulties in establishing itself as a place of worship for great persons and did not host any official funerals. Unofficially, on the other hand, presidential funerals, including in absentia, with international staging, from Charles de Gaulle to François Mitterrand, remain the privilege of Notre-Dame. This dimension remains ambiguous, however: through its fame, the cathedral of Paris is a symbol of France in the world, but without ever imposing itself as its national secular sanctuary. Religion is always present, but as a “stowaway” in the administration of the heritage. 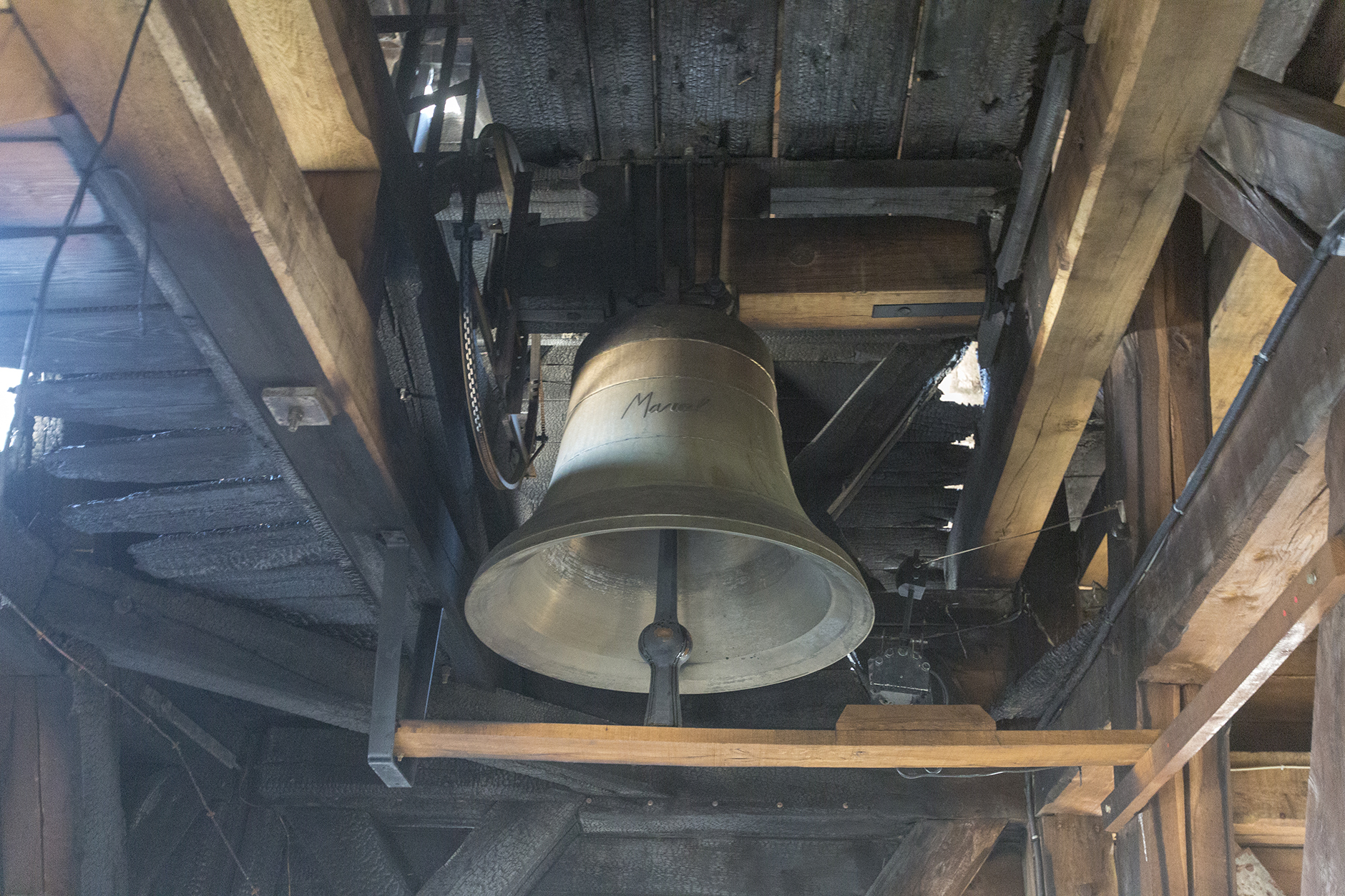 One of the bells of the north belfry, Marcel, after the fire. Named after Saint Marcel, the ninth bishop of Paris. © C2RMF, Alexis Komenda, 2019. 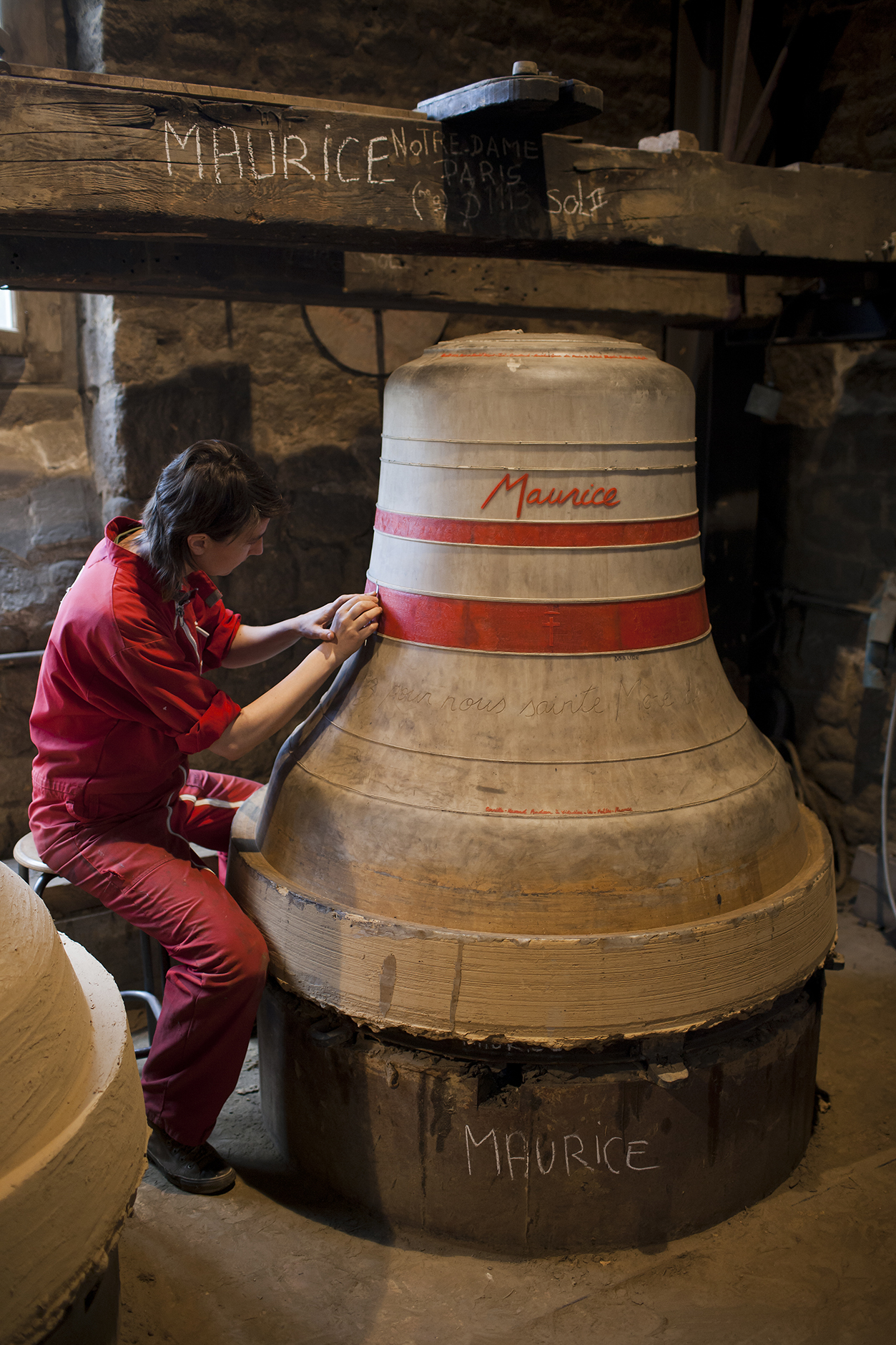 When, on the evening of the fire, the fire spread to the north tower of Notre-Dame, the bells were the focus of all concern: their fall could endanger the structure of the building. Since then, the eight bells of the stricken tower have not rung on religious or civil holidays – a silence noticed by the local residents, for whom the evocation of the cathedral's bells arouses a palpable emotion. But the absence of ordinary ringing does not mean that these instruments have been forgotten. It reactivates the memory of the commemorations of the 850th anniversary of the cathedral, when nine new bells tuned to the Emmanuel drone were installed to replace those cast in the 19th century. After their entry into Paris to the cheers of the crowd, each new bell was given a name: Marie, Gabriel, Anne-Geneviève, Denis, Marcel, Étienne, Benoît-Joseph, Maurice and Jean-Marie. For visitors to the cathedral, this ceremony was an opportunity to admire their decoration, which is astonishingly rich for instruments that were intended to remain hidden. This shows the highly symbolic value of the bells, whose future sometimes crystallizes passions. When the removal of the 19th century bells was announced, defense associations were formed to prevent the bells that had sounded the liberation of Paris from being destroyed or sold. Because the civil bells of Notre-Dame vibrate in the great hours of the Nation. The great solemn one expresses the joys, like the armistice of the First World War. The knell chants the sorrows, as for the tribute to the victims of the attacks of the newspaper Charlie Hebdo in 2015. Since the fire, the Emmanuel bell located in the south tower of the cathedral continues to ring for major national events. This was the case on September 29, 2019, for the funeral of former President of the Republic Jacques Chirac. Then, on April 15, 2020, the bell rang again at 8pm for the first anniversary of the fire. This ringing was filmed by a private television station. Rather than making this footage exclusive, it was offered to all the channels that wished to retransmit it, underlining the national scope and the public dimension of the bells and ringing of Notre-Dame. 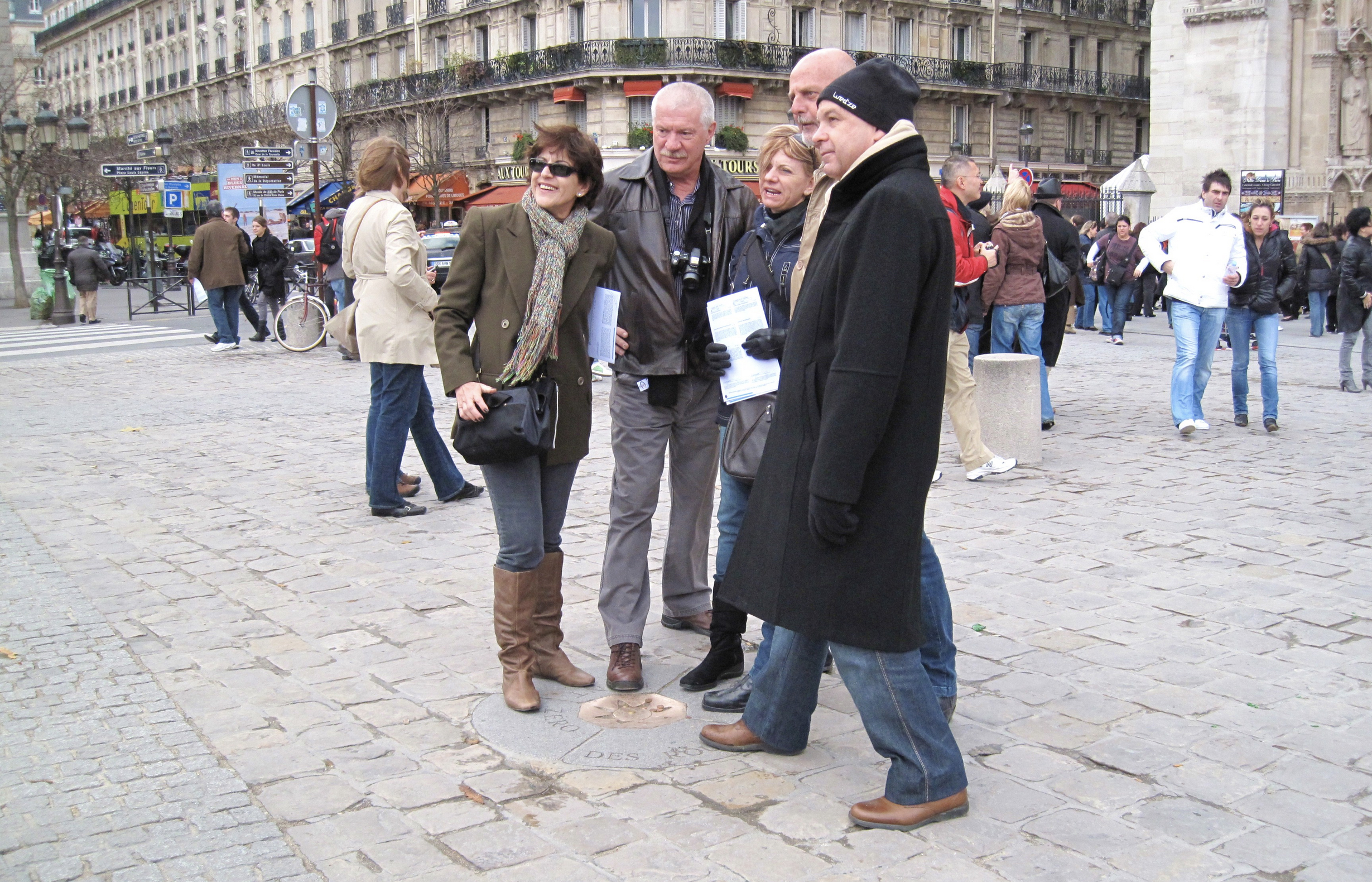 The zero point of the roads of France, located on the foreground of the cathedral, is a symbolic place where tourists take the pose. © Jean-Pierre Bazard, 22 novembre 2009, Creative Commons.

The "zero point of the roads of France" from which the road distances are calculated is materialized on the ground of the cathedral square by a compass rose engraved in the center of an octagonal bronze medallion, itself surrounded by a circular stone slab divided into four quarters. Visitors like to put their foot on it, or to touch it with their finger before immortalizing the moment with a photograph. Others are tempted to throw a coin on it, probably accompanying the gesture with a wish, as they would when passing by a well or a fountain.

This signage seems to awaken an imagination of centrality and origin, in harmony with the symbolic charge with which the cathedral is adorned. But at the beginning of the last century, at a time when some people were campaigning for this point to be indicated on the ground, opinions were divided as to its precise location. Thus, since 1912, there has been a debate in scholarly circles, with the help of archives (plans and letters patent) or indirect sources testifying to a statue or a post that served as a marker, but which have unfortunately disappeared. In reality, there are two opposing camps, the first being in favor of a location prior to the French Revolution, the second advancing the existence of a post-1789 boundary marker, but of which no material trace remains. Although the divergence is only based on a few dozen meters, it opposes two legitimacies: monarchic and republican. Whatever the uncertainties that lie at the root of all these debates, one thing is clear: the heart of France's arterial system cannot be located anywhere else but in the shadow of Notre-Dame. Anxious to bring everyone to an agreement, the prefect of the Seine decided in 1924 to locate this point at an equal distance from the points resulting from the main hypotheses, to the great satisfaction of the Paris city council, which was anxious to prevent the bronze pavement from hindering traffic.

Chapter 4  Trees from all over France 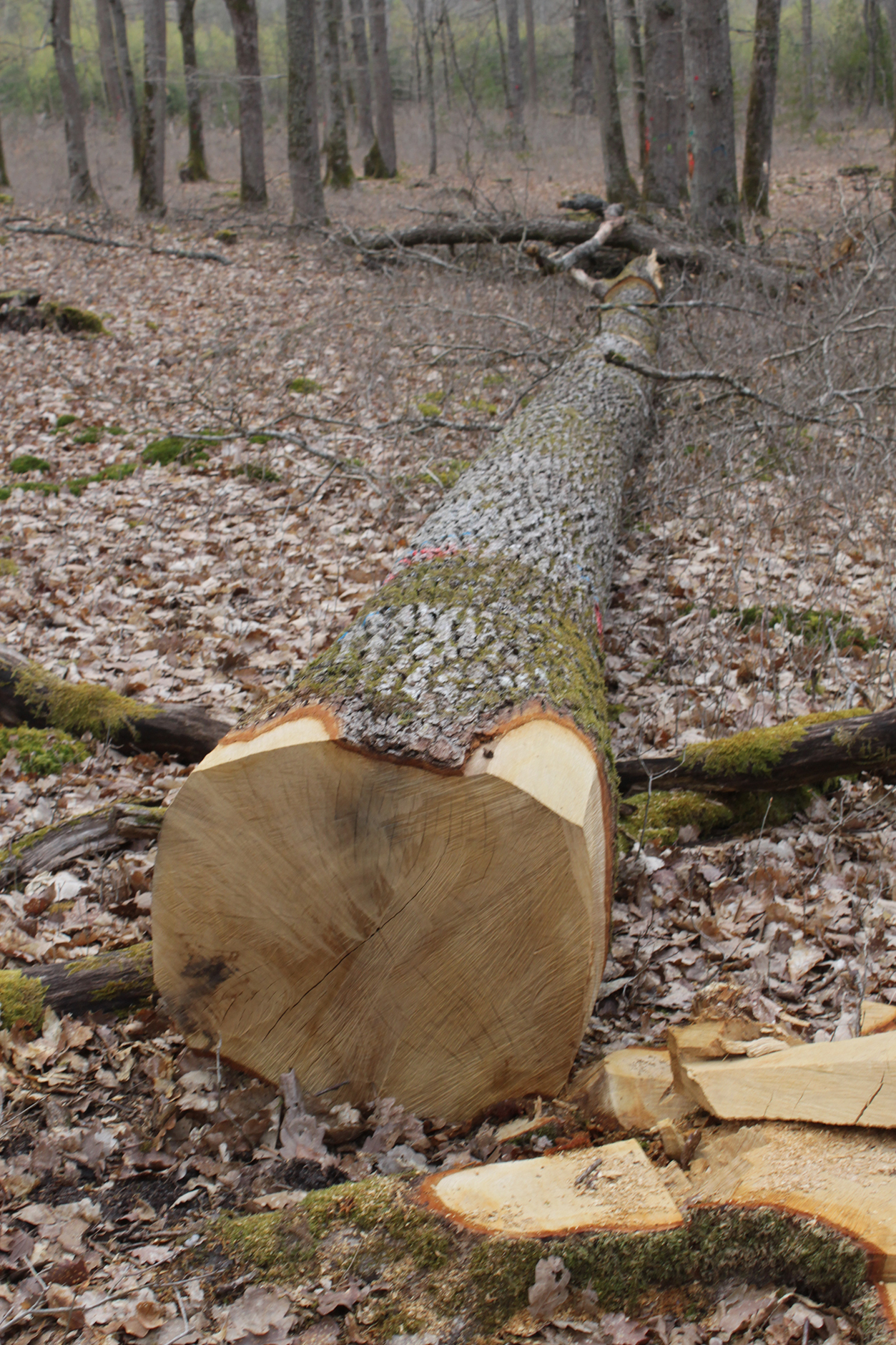 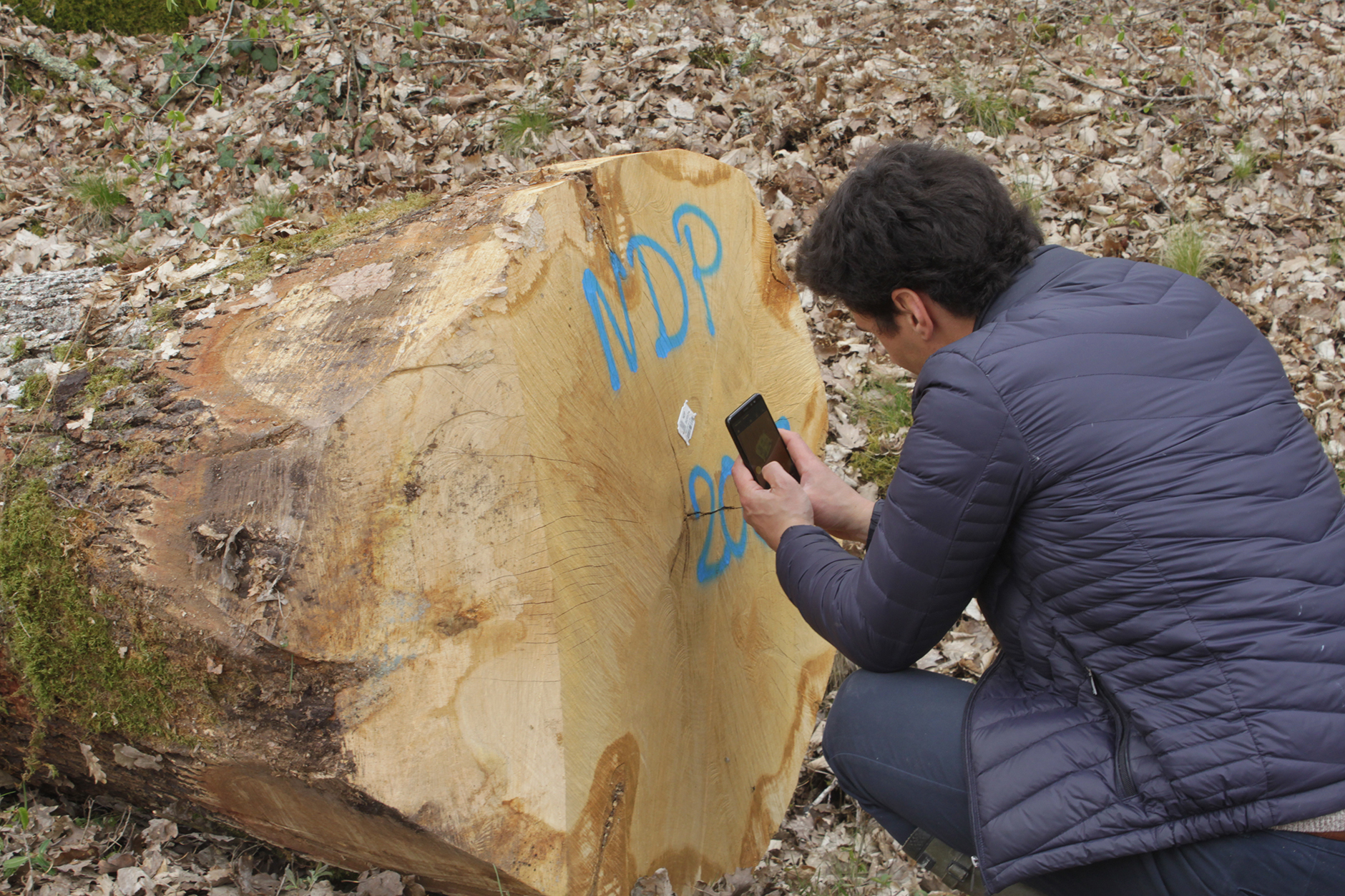 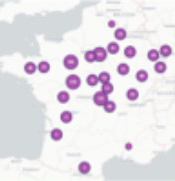 During the fire, the roof framework of the cathedral, called "the forest", and that of its spire went up in smoke. Immediately, the wood professionals explained that the French forests had all the trees necessary to replace them. For a while, debates about whether or not to restore the building identically raged. Other restorations were highlighted, where the wooden frames have been replaced by metal or concrete structures. In the press, the expectations of an identical reconstruction were widely spread, even if some voices were heard to protest against the massacre of centuries-old oaks.

In July 2020, the Head of State ratified the principle of an identical reconstruction in wood. On the proposal of the professional sector, a decision was taken, explicitly symbolic: to illustrate the national dimension of the cathedral, the oaks that would form the framework would have to come from all regions of France, in varying proportions according to local possibilities. A huge search was then organized, both with the National Forestry Office, which manages state and municipal forests, and with private owners, and a gigantic sponsorship operation was set up. All the trees were provided free of charge.

Within a few months, the thousand oak trees needed to rebuild the spire as well as the transept framework and the adjacent spans were found, half from public forests - 32 state forests and 70 communal forests - and the other half from nearly 150 private forests. The quality criteria for the reconstruction of the spire required trunks of 20 meters, perfectly straight and without defects, smaller dimensions could be used for the reconstruction of the vault. Since all trees harvested in France must come from forests managed according to the principles of sustainable development, the trees proposed for Notre-Dame would have been harvested regardless of the disaster, somewhat contradicting the idea of an exceptional harvest of extraordinary trees.

This national operation is nevertheless a success: the regional media covering the campaign to remove the trees in March 2021 report the pride of the communes or owners who see their oak "go to Notre-Dame". Each one finds a way to underline the exceptionality of the operation: some trees are blessed before being felled, some communes plan to put a plaque on the stump indicating the destination of the oak concerned, while the debris resulting from the felling is preciously preserved by the families.