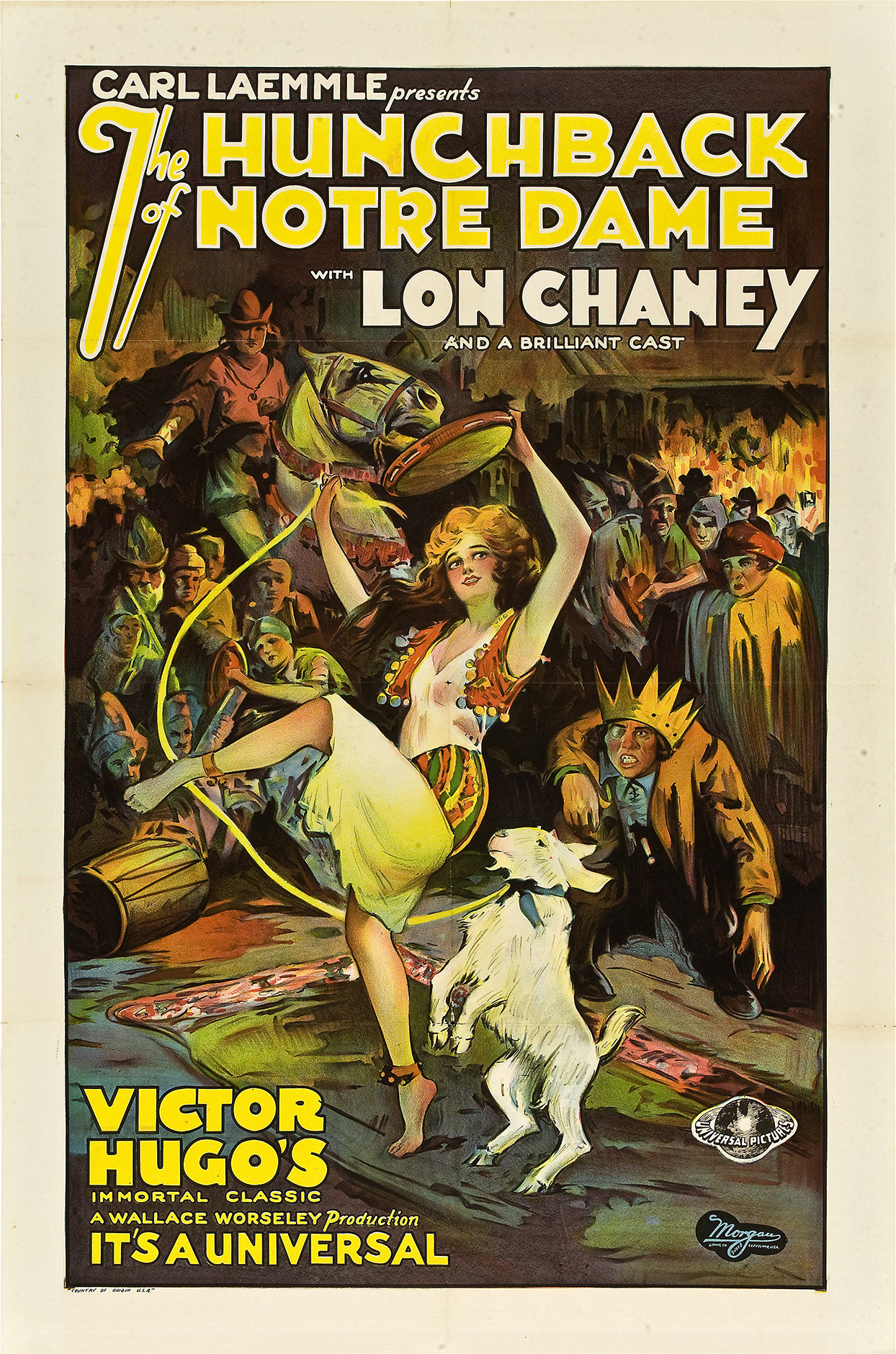 Poster of the film "The Hunchback of Notre-Dame" (1923), directed by Wallace Worsley with Lon Chaney in the role of Quasimodo. © Universal Pictures, 1923. 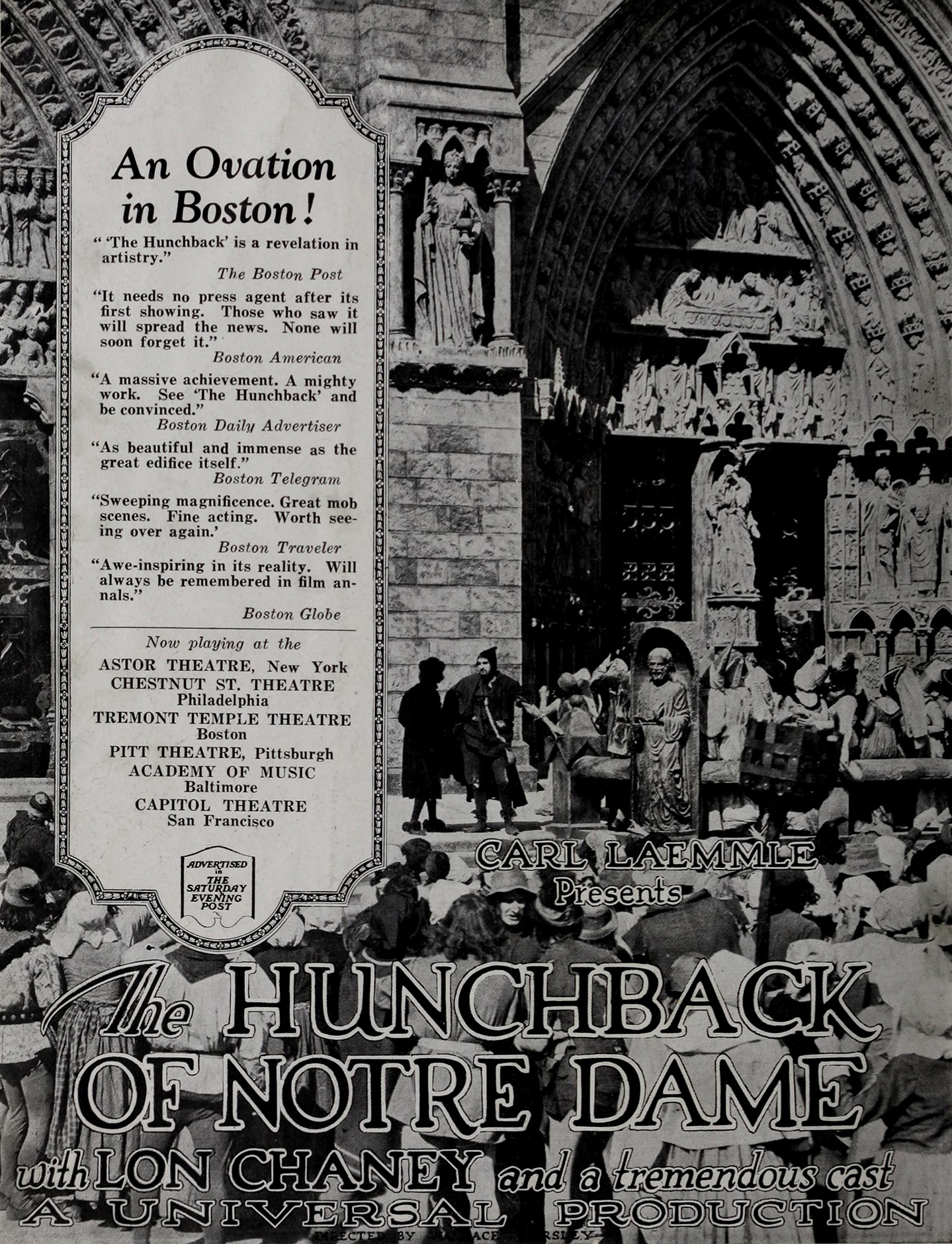 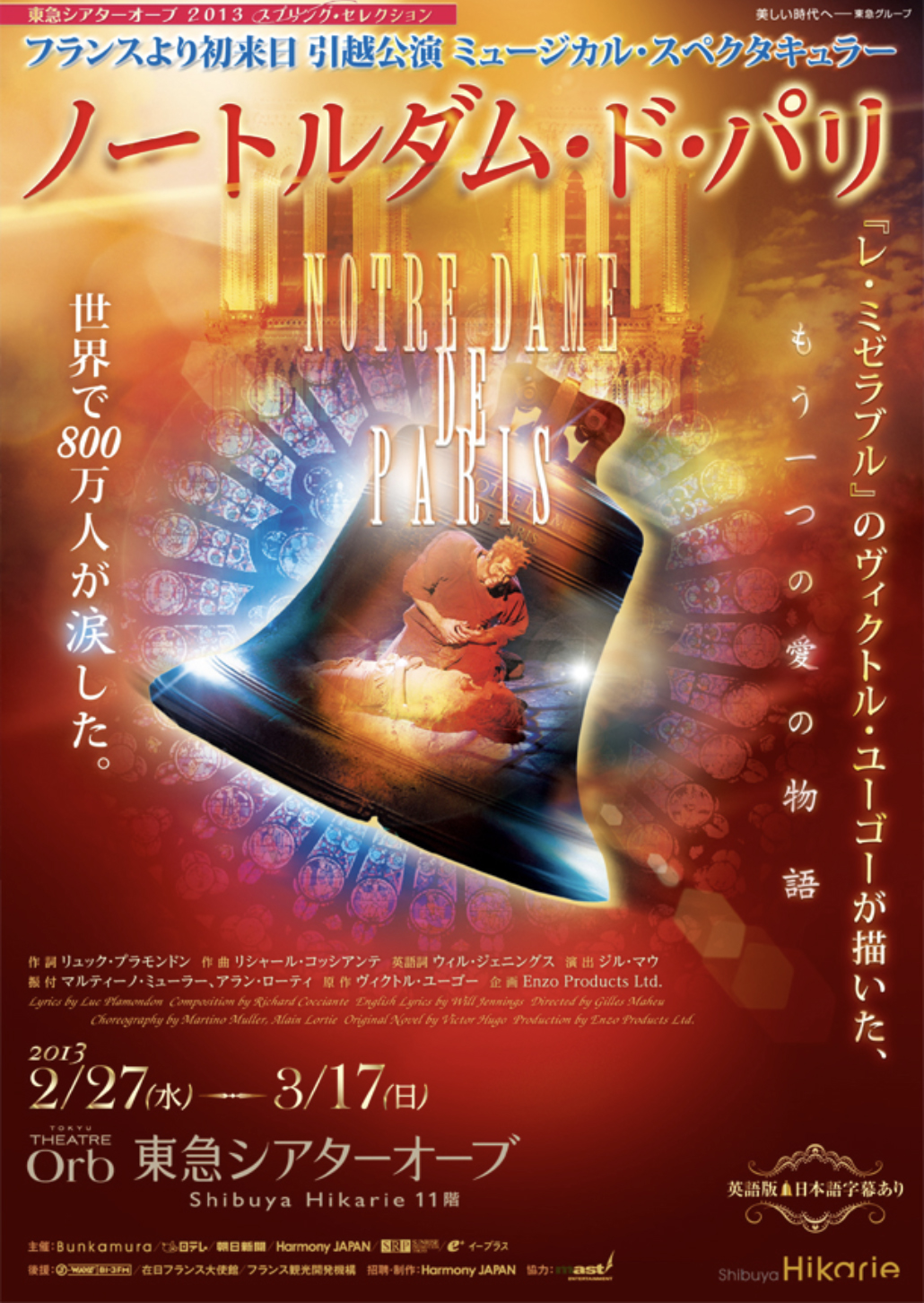 Except for the immersion they offer in the great stream of history, what do Assassin's Creed Unity (2014), which takes players to the time of the French Revolution, and The Saboteur (2009) or Call of Duty: WWII (2017), whose action takes place during the Second World War, have in common? The conquest of the videogame universe by Notre-Dame de Paris. Thus, the monument confirms the place of choice it occupies at the heart of the globalized popular culture of the 21th century. The phenomenon is not new. It owes much to Victor Hugo and his novel published in 1831, whose various adaptations, in the cinema and then on the small screen, have marked the 20th century. Generally cited, The Hunchback of Notre Dame by William Dieterle (1939) and Notre-Dame de Paris by Jean Delannoy (1956) leave unsuspected many other films shot on the old and new continents. In the 1990s, Disney Studios' feature films The Hunchback of Notre-Dame I and II (1996, 2002) and the children's television series The Magical Adventures of Quasimodo (1996) brought Notre-Dame into the realm of animation. The stage was not left out, or more precisely the musical theater, which came out of its lethargy at the same time. In 1998, Richard Cocciante and Luc Plamondon created a work that was performed in more than 20 countries and translated into 9 languages. Less resounding is the success of Der Glöckner von Notre Dame (adapted from the cartoon in 1999 by Walt Disney Theatrical Productions and offered "only" in Germany, the United States and Sweden), and even less that of Klokkeren fra Notre Dame (created in 2002 by Knud Christensen for Danish audiences). These creations nevertheless testify to the international influence of Hugo's work and its heroine of stone. The artists of these musicals succeed other renowned performers in singing about Notre Dame, such as Édith Piaf or Léo Ferré, or even Brian Wilson of the Beach Boys. One might be tempted to see this as the revenge of the novel that was blacklisted as soon as it was published. Historians are right to contradict us: translations, operas, plays, ballets, derivative products ("Esmeralda dresses", prints, paintings, sculptures, crockery, knick-knacks, etc.) have in fact followed closely the publication of the work to make it "a total work of art, multimedia before its time". 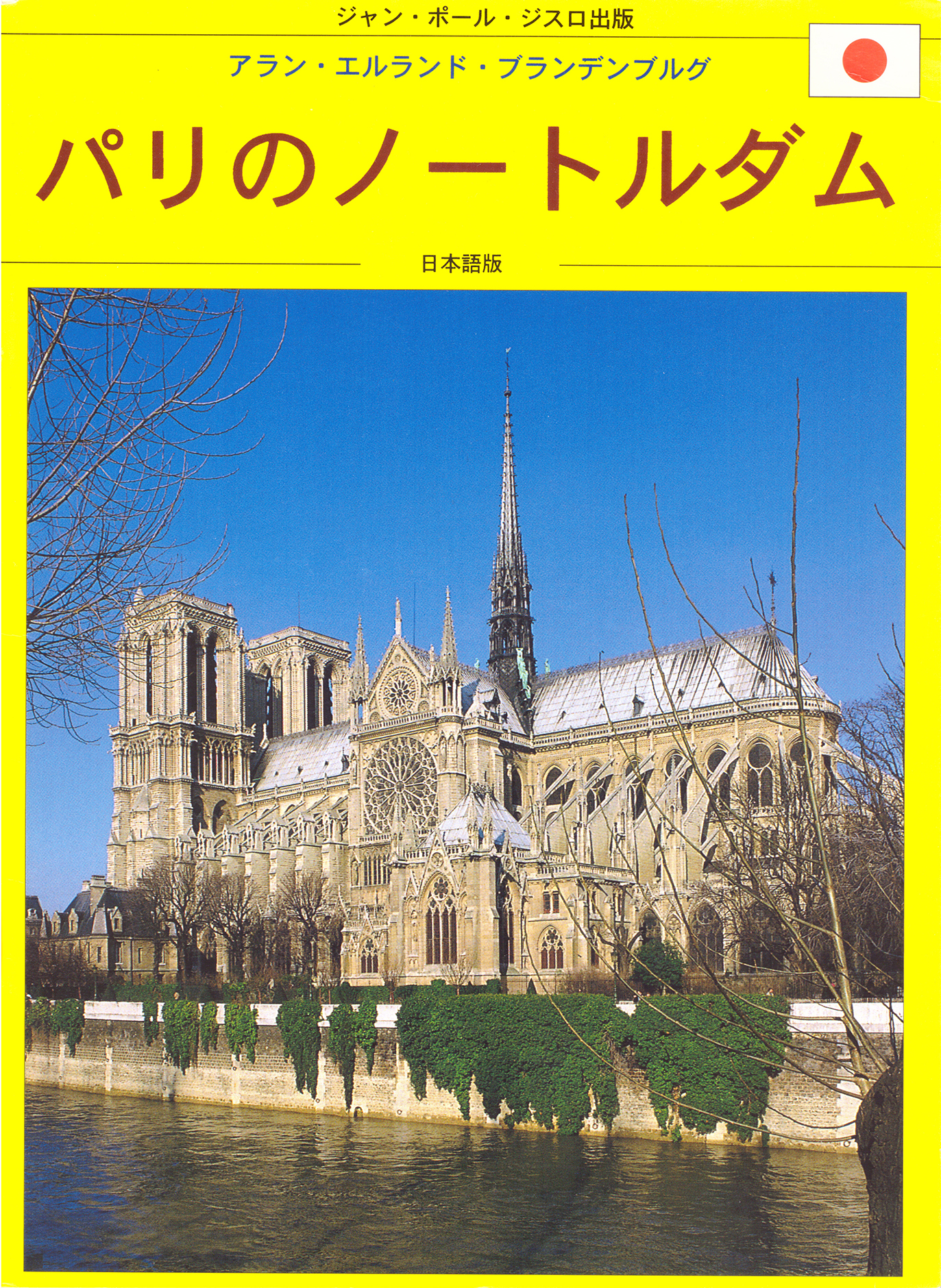 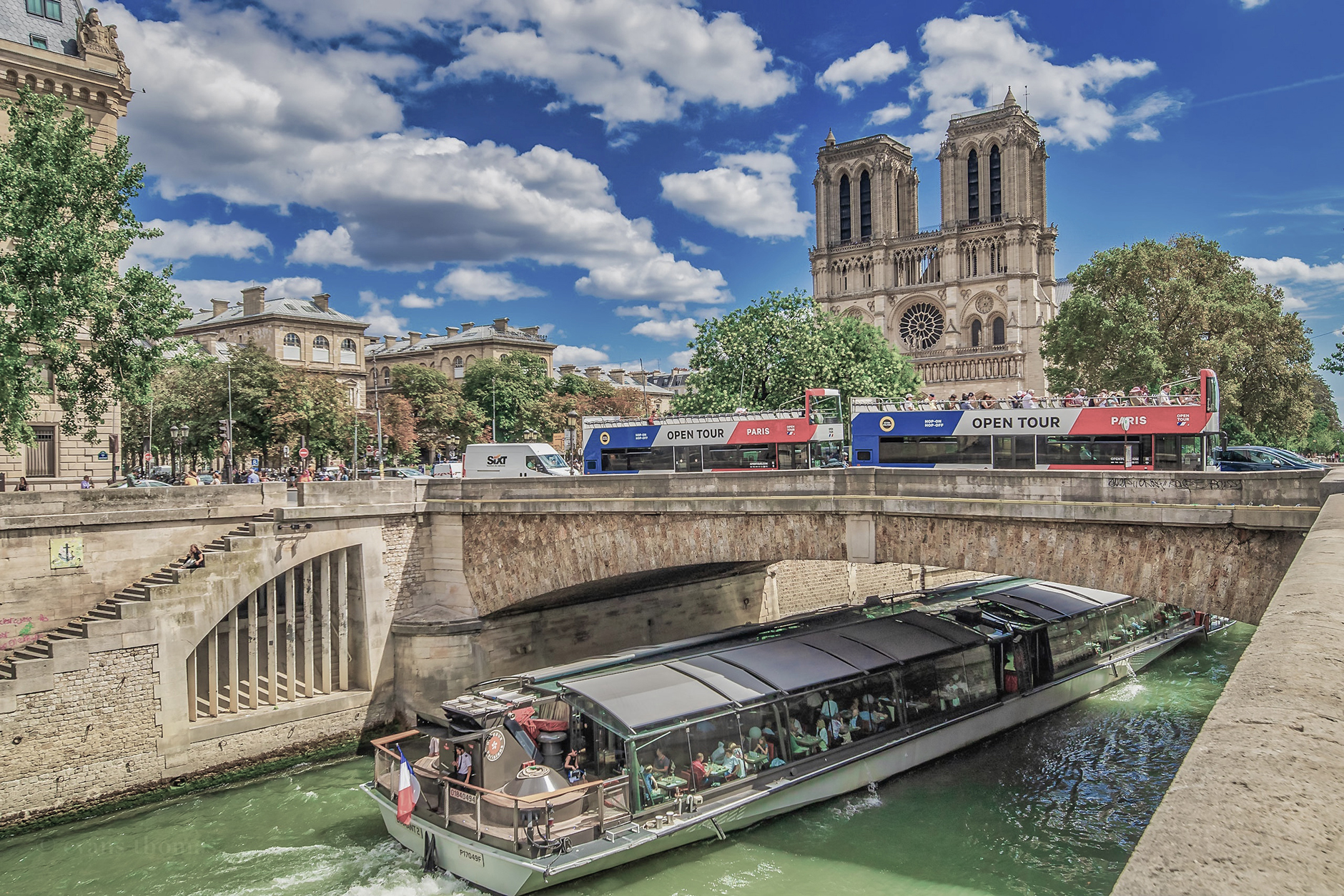 From the point of view of tourism, Notre-Dame de Paris is the cathedral of superlatives: it is the most visited monument in Paris, France and Europe, and even the most visited in the world, at least when the Forbidden City in Beijing does not occupy first place on the podium. The attendance figures, repeatedly reported in the press since the fire, attest to this: every year, 20 million people walk through its forecourt, three-fifths of whom, i.e. 12 to 14 million people (or more than 30,000 per day), enter the interior. In reality, these are only estimates, because these audiences have never been accurately counted or studied. A hasty observer may be tempted to consider Notre-Dame as a "mass" tourist attraction.

In doing so, he fails to perceive the other nuances of this over-frequentation. French or foreigners, coming in groups, with their families or alone, the visitors are distributed in different categories: tourists in a hurry to accumulate discoveries, business travelers, Catholic pilgrims fond of this Marian sanctuary erected as a basilica and guardian of prestigious relics, lovers of old stones fascinated by Gothic art. All of them contribute to swell the crowd that rushes to Notre-Dame, without it being always possible, however, to distinguish one from the other, as the motivations that preside over the visit can be multiple for each one. Under the vaults of the cathedral, music lovers are also attracted by the songs of the choir, the auditions and the organ recitals. They rub shoulders with believers of a spiritualist "belief", detached from the doctrines of the Church, in search of sites "charged" with the supernatural, with mystery and the sacred, as Notre-Dame, the epicenter of a multi-secular faith, can be to them. Erected as a "place of memory" of the Second World War by virtue of the role it played in the dramaturgy of the liberation of the capital, the cathedral also welcomes veterans from across the Channel and the Atlantic and their descendants. All the variations of perception that the monument allows make it the place of a "total experience", on which rests the exceptional power of its magnetism. 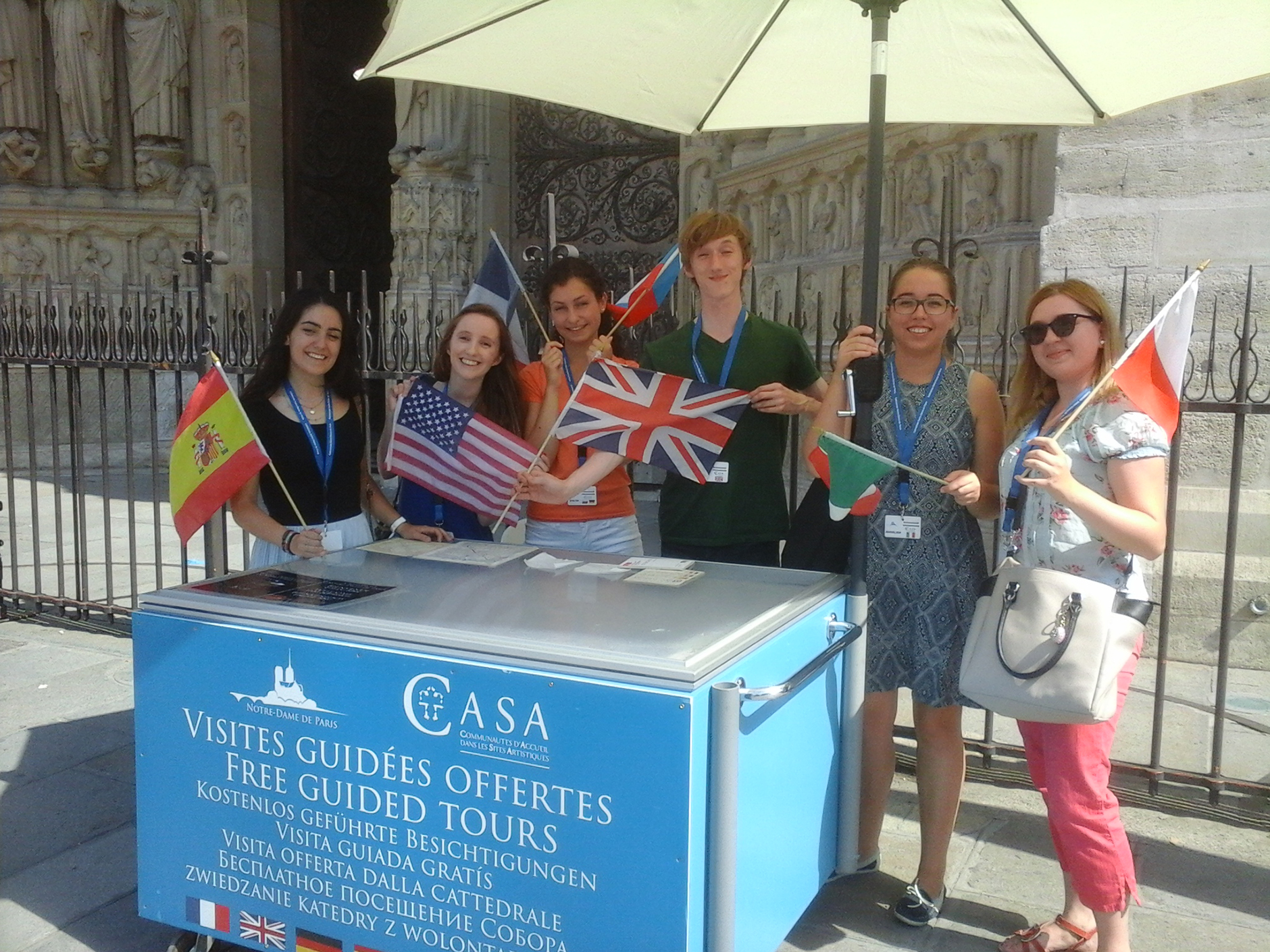 Photo with the welcome desk: The CASA Notre-Dame International Community in Paris in August 2015, in front of the cathedral's façade. © Association CASA, 2015.

Some people agree to underline the incompatibility a priori between the influx of tourists and the religious vocation of a site, which is moreover in a situation of excess tourism. At Notre-Dame de Paris, where the "shush!" of the guards regularly resounds under the vaults, the problem seems to be posed with some acuteness. The efforts of Mgr Jean-Marie Lustiger, and after him of his successors, to make it a more lively church than the others, bear witness. With some 2,000 services and a hundred or so special ceremonies celebrated each year, in addition to Sunday spiritual conferences, the clergy is determined not to leave the field open only to tourist uses. However, it would be wrong to consider the coexistence of cultural and religious uses in terms of conflict. For the Church, in general, is careful to avoid the irritation and mistrust that tourism can arouse. On the contrary, it sees the visit to its churches as an opportunity for contact. It is a matter of, if not witnessing to the Gospel, at least ensuring a welcome that puts it in a position to be welcomed and understood during these fleeting moments of encounter. This is the meaning of the pastoral care of tourism which, at Notre-Dame de Paris, has been taken care of since 1972 by the volunteers of CASA (Communautés d'Accueil dans les Sites Artistiques). Created in 1967, this national association gives form to its mission of welcome through free guided tours of religious buildings, with no predetermined duration or fixed schedule, offered in the summer by young people who, at the same time, are called to experience life in community. Since 1977, in the Paris cathedral, the system is a little different: the visits are given throughout the year according to a pre-established schedule, in about ten languages, by volunteers recruited without age restrictions. In the summer, they make way for the international communities that were created in 1981. Almost closed to French speakers, these communities are reserved for young people aged 18 to 35. By shaking up its habits, the fire is not only leading CASA to reinvent its guidance, but also to rediscover the fundamentals of pastoral care as understood by its founder, Father Alain Ponsar (1917-2012). 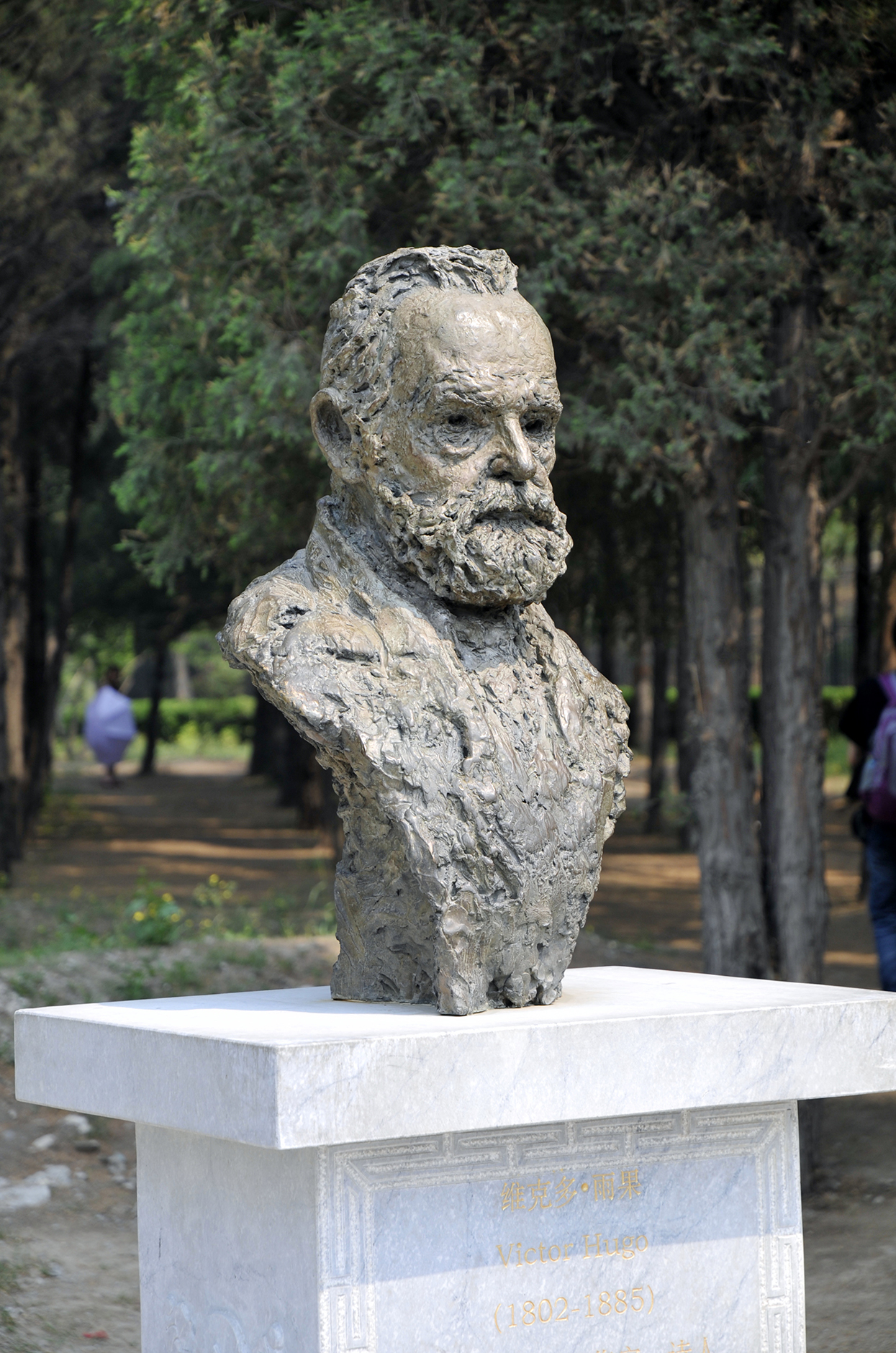 Bust of Victor Hugo in the Park of the ruins of the former Summer Palace, Beijing, China, May 27, 2011. © Mayanming, Licence Creative Commons Attribution-Share Alike 3.0 Unported.

"Quasimodo has already lost the girl he loved; he has finally lost the towers that were so dear to him. This remark has been expressed in many ways by many distressed Chinese Internet users, discovering the image of Notre-Dame burned. Why is this character from Victor Hugo's novel Notre Dame de Paris so well known in China? The novel's fame is linked to the immense fame Victor Hugo enjoyed because of his reaction to the sacking of the Summer Palace, the extraordinary residence of the Chinese Emperor Xianfeng, looted by Anglo-French troops on October 18, 1860, during the Second Opium War. In his letter to Captain Butler, the French writer denounced the actions of the French and British "bandits" and deplored the resulting devastation. This statement became famous, particularly because of its integration into the Chinese school curriculum. It bears the seeds of the idea of a world heritage, that of "wonders of the world" combining "the Parthenon in Greece, the pyramids in Egypt, the Colosseum in Rome, Notre Dame in Paris, the Summer Palace in the East", whose universal value exceeds national belonging. Victor Hugo is thus considered as a model to be followed in front of a patrimonial catastrophe. A controversy has also swelled on Chinese social networks in the days following the fire: while some Internet users saw in the disaster that struck the French cathedral a just revenge for the destruction of the Summer Palace, most put forward the attitude of Victor Hugo and defended the idea that heritage goes beyond nations and their differences to bear witness to the works of humanity as a whole.

If the aura surrounding Victor Hugo in China deeply anchors the story of Quasimodo and the cathedral in the Chinese imagination, the film and theater adaptations of the novel also contribute to the dynamics of this imagination. Thus, the musical Notre-Dame de Paris, by Luc Plamondon and Richard Cocciante, and the animated film The Hunchback of Notre-Dame, by Disney, are remarkably successful in China. If the novel made it possible to save Notre-Dame almost two centuries ago, it is still very much a part of the cathedral's worldwide influence, bringing it to life in Chinese minds.