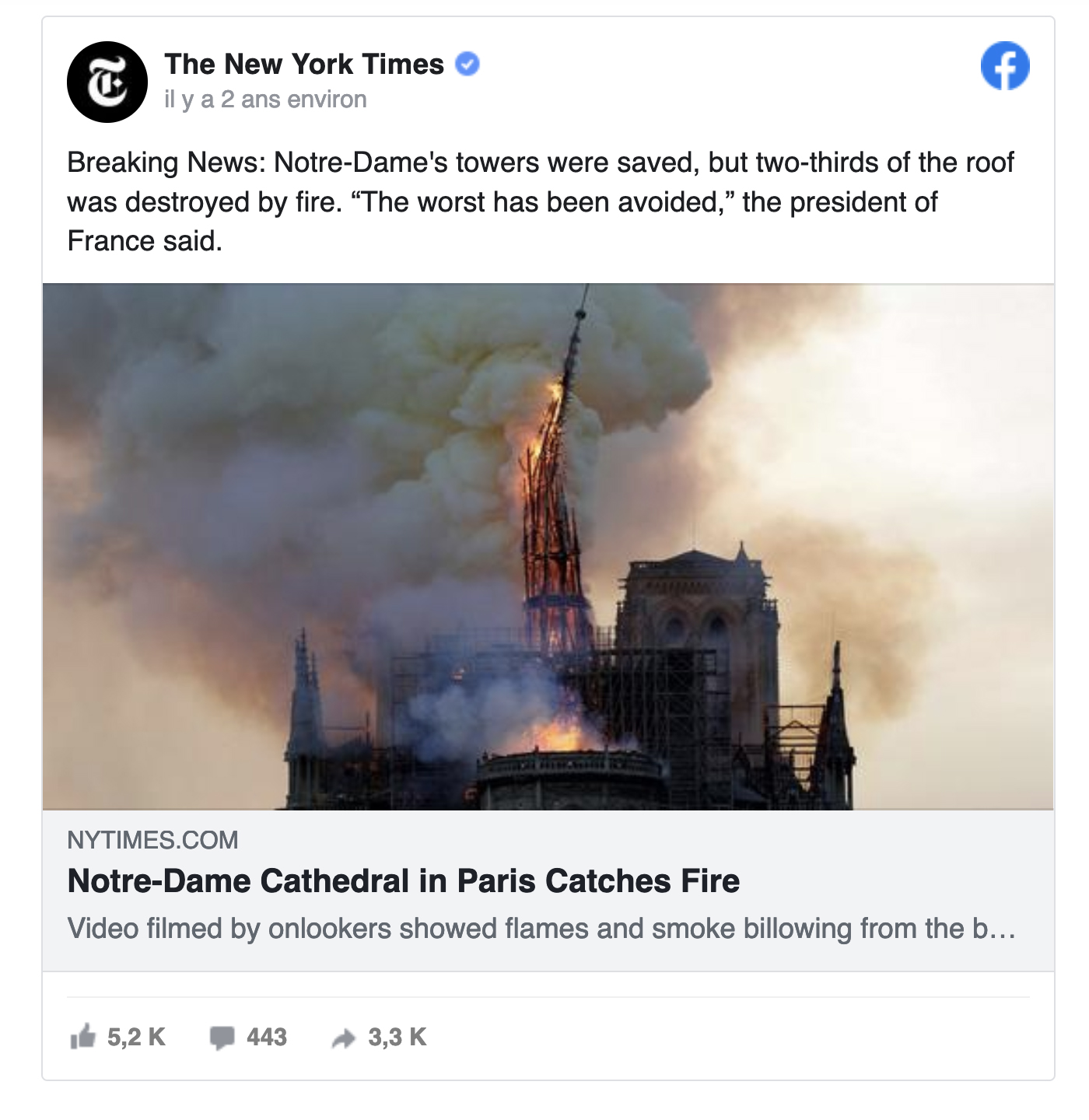 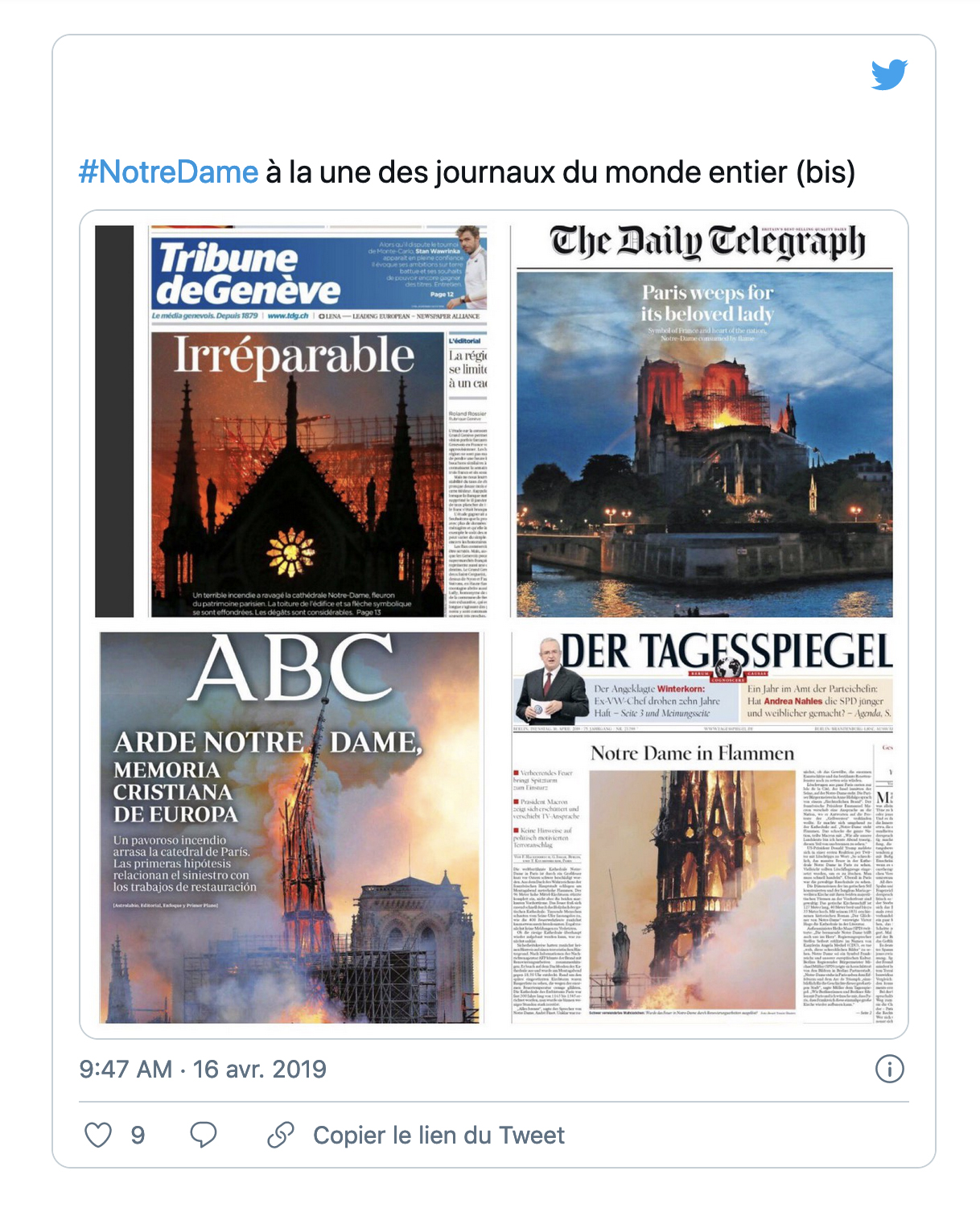 Notre-Dame de Paris on the front page of newspapers around the world. © Twitter, avril 2019.

On the evening of 15 April 2019, all the French media are in the starting-blocks, ready to relay the televised address of the President of the Republic, scheduled for 8 p.m., and to comment on his announcements in response to the Yellow Vests movement and as a conclusion to the ‘Grand National Debate’ launched three months earlier. But the fire, whose first images appear on small screens a little after 7 p.m., has reason for this presidential appointment that journalists describe as ‘decisive’, and even ‘historic’: Emmanuel Macron postpones his speech, while all television channels reshuffle their schedules in order to report live from the event. In imitation of the four continuous news channels, the other major television channels, both private and public, such as TF1, France 2 and France 3, switched to special editions that continued late into the evening. It is estimated that when the President arrives on the site of the disaster at a little before 9 p.m., one out of every two French persons is riveted to their television sets, viewing the images as they repeat in loop. The information is also broadcast by foreign television stations, punctuated by messages of grief from a vast array of internationally renowned personalities (statesmen and stateswomen, mayors of major cities, and major figures in political, cultural and sports life, etc.). Their reactions animate what is normally uneventful airtime. As during the terrorist attacks of 2015, in Paris, CNN U.S. and CNN World News are combining their efforts on this evening to report the event live. A huge number of factors contributed to the unprecedented nature of media coverage: the setting of the tragedy, Paris and the Île de la Cité; the anguish mixed with emotion of the Parisian crowds amassed on the squares, bridges and quays of the Seine; the apocalyptic spectacle of the flames, and the uncertainty weighing on the outcome of the drama. After this evening of global mediatic communion, the disaster made front-page headlines of the daily, regional and national newspapers the next day in France and around the world. Every kind of media source are already working hard to create special editions, reports filmed on the spot and thematic issues dedicated to the martyred cathedral, which they will complete in record time during the following days.

Chapter 2  Donors from Around the World 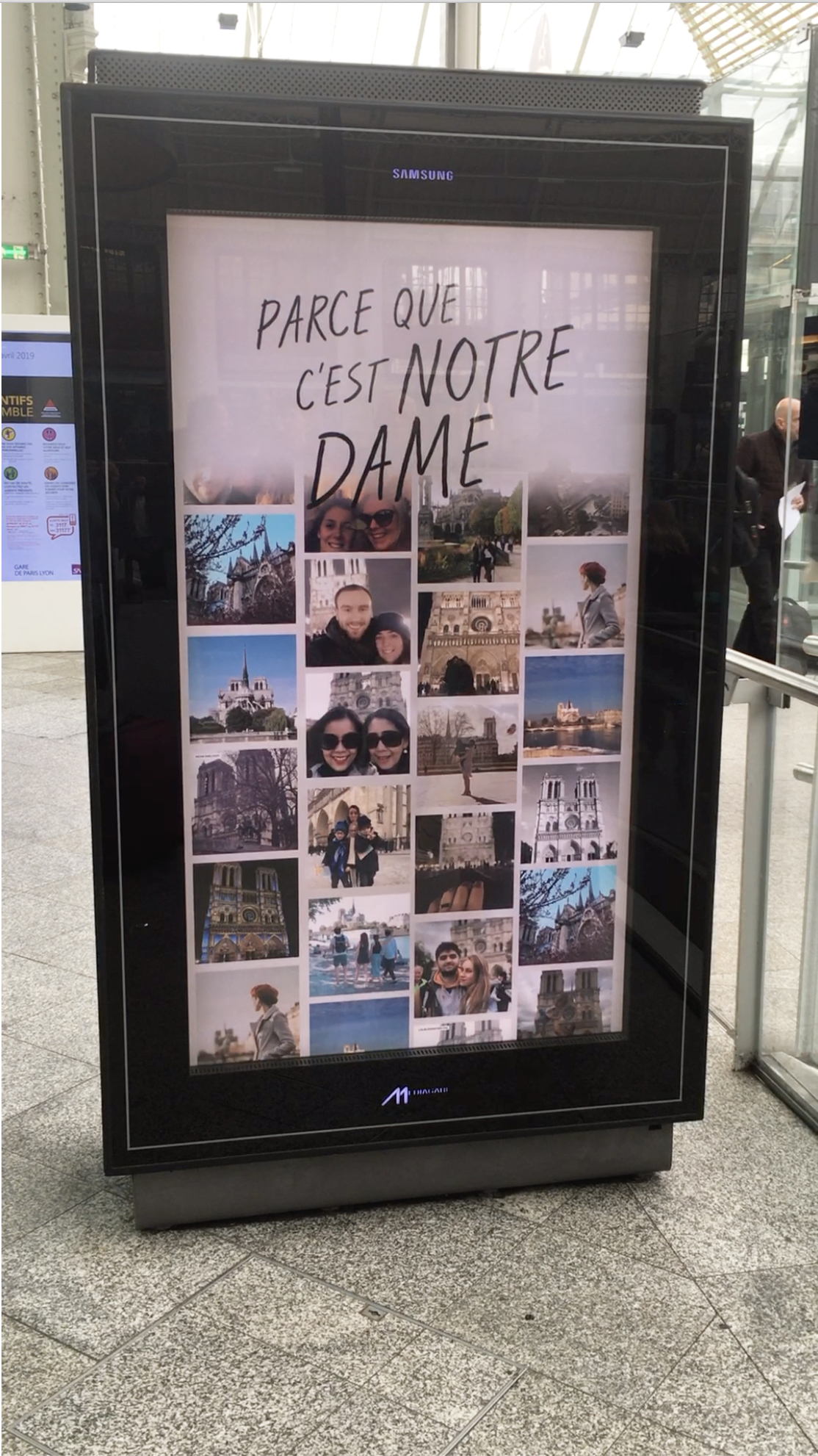 Poster calling for donations in the hall of the Gare de Lyon. It highlights the multitude of individual relationships at Notre-Dame de Paris. © Claudie Voisenat, avril 2019. 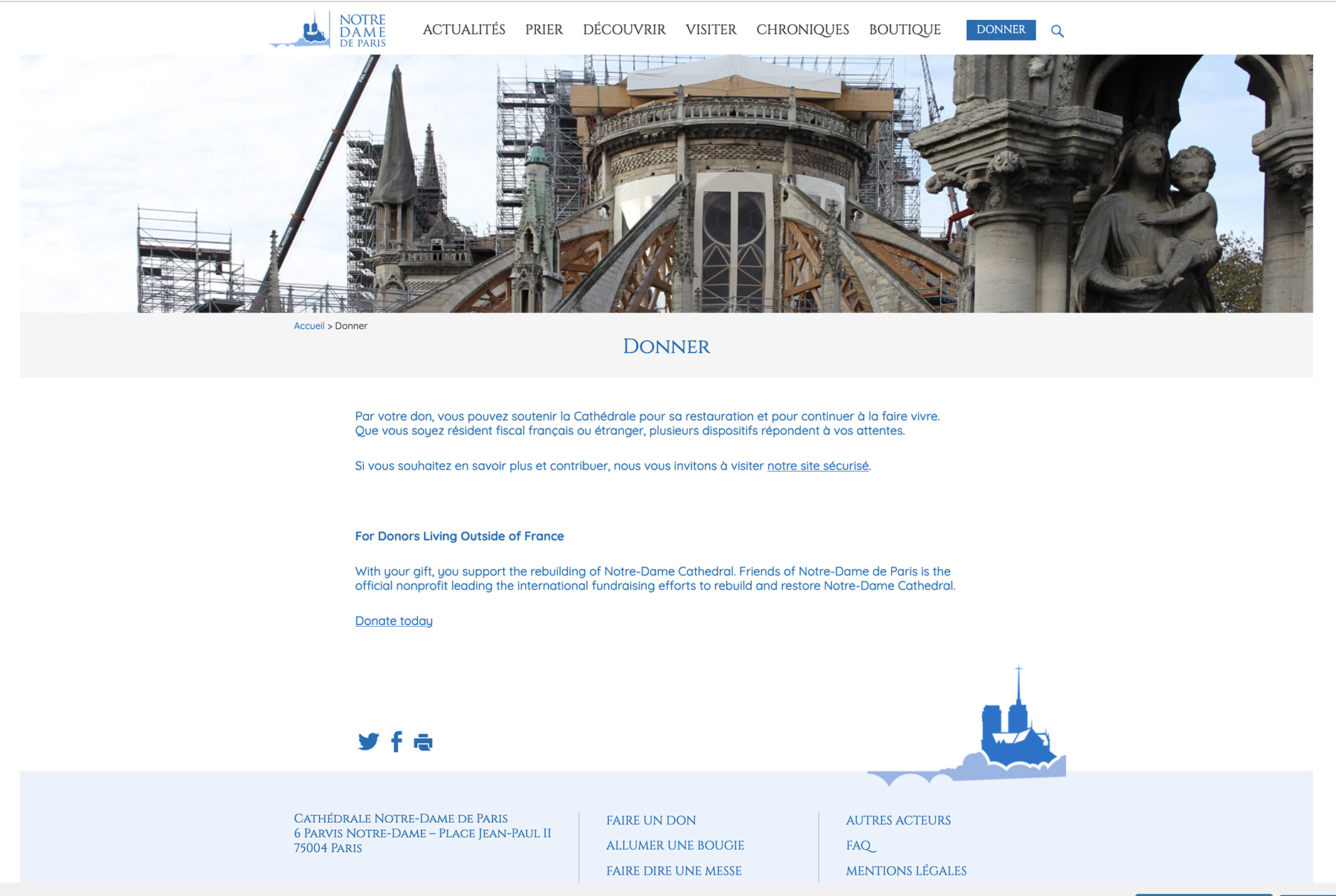 Call for donations to "support the Cathedral for its restoration". © Cathédrale Notre-Dame de Paris, 2021. 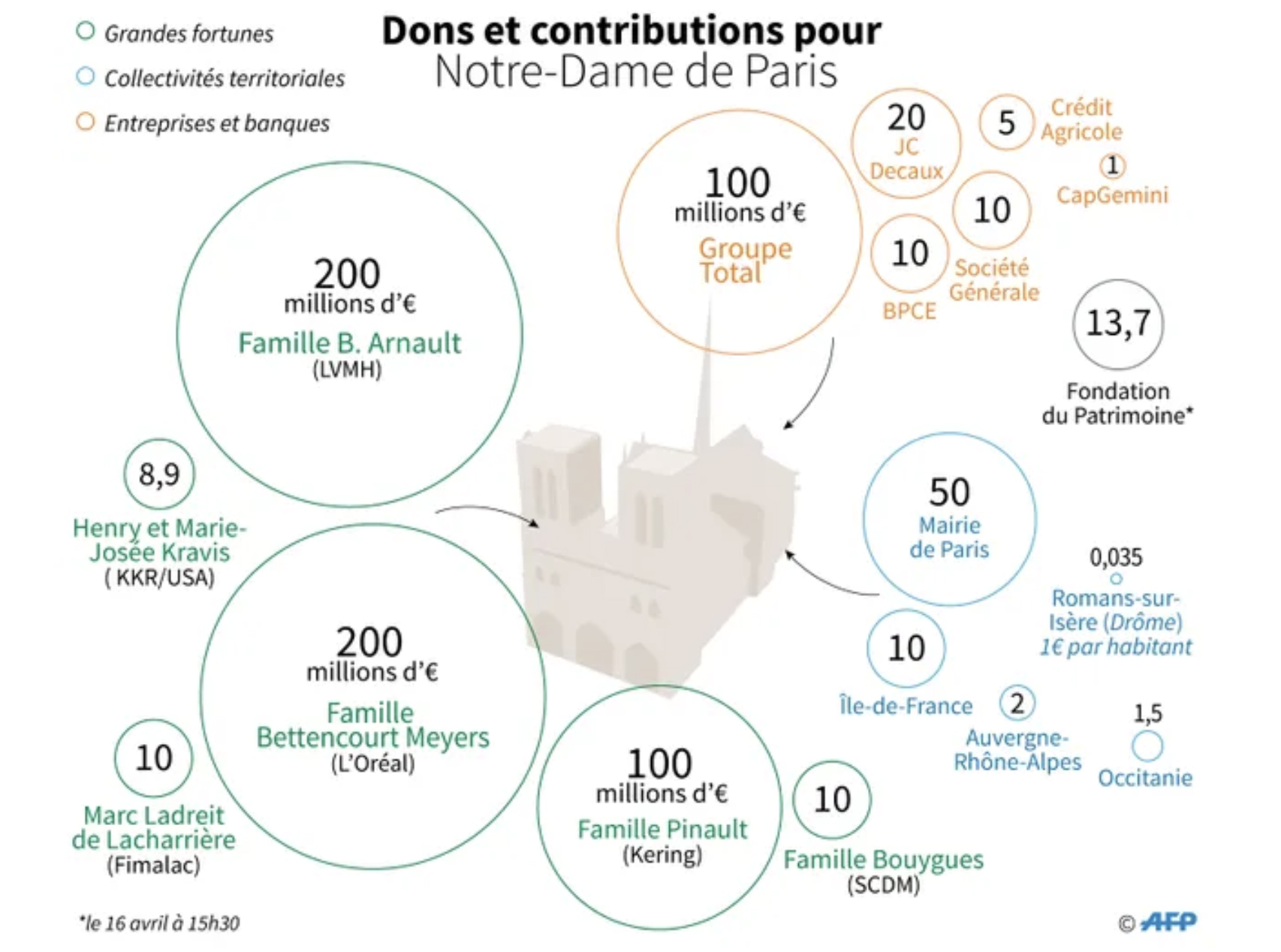 As the flames ravaged the cathedral, French industrialists François and François-Henri Pinault, father and son, declared a donation of 100 million euros ‘to participate in the effort that will be necessary for the complete reconstruction’. In the wake of this, President Macron announced the launch of a national and international fund-raising campaign. From 16 April 2019, the Center for National Monuments and three other foundations share a common platform on the government website to collect donations. The pledges are rising quickly, reaching more than one billion euros, propped by new major donors, including industrial and banking groups, regional and departmental authorities, and municipalities of various sizes. The phenomenon extends beyond France. Funders from the United States participate in the momentum. These include, co-founder Henry Kravis of the investment fund KKR, the multinational company Apple, the University of Notre-Dame in Indiana, the magazine Magnificat and the French Heritage Society. The city of Szeged in Hungary shows its solidarity in return for the recovery assistance it received from Paris in 1879 following a devastating flood. Above all, however, it is the 340,000 anonymous donors from more than 150 countries who are responsible for the majority of the 830 million euros raised. This figure is the result of donations sent directly to the four authorized institutions plus money collected by other sources. There are countless initiatives for raising funds: the number of pots is increasing, as are the fund-raising products (books, CDs, household linen, wine, concert tickets, entries for a pétanque competition, etc.), from which a share of the proceeds are donated to the restoration. In addition to these cash donations, there are also donations in kind. Notably, these include donations of oak trees, as well as an offer from the Dutch violinist and conductor André Rieu to donate 700 tons of steel used in creating the scenery of his show A Romantic Night in Vienna for reuse in the erection of the scaffolding needed in the reconstruction. The sponsorship of services and skills completes the picture of a global generosity so rarely witnessed.

Chapter 3  When the Web Goes Up in Flames 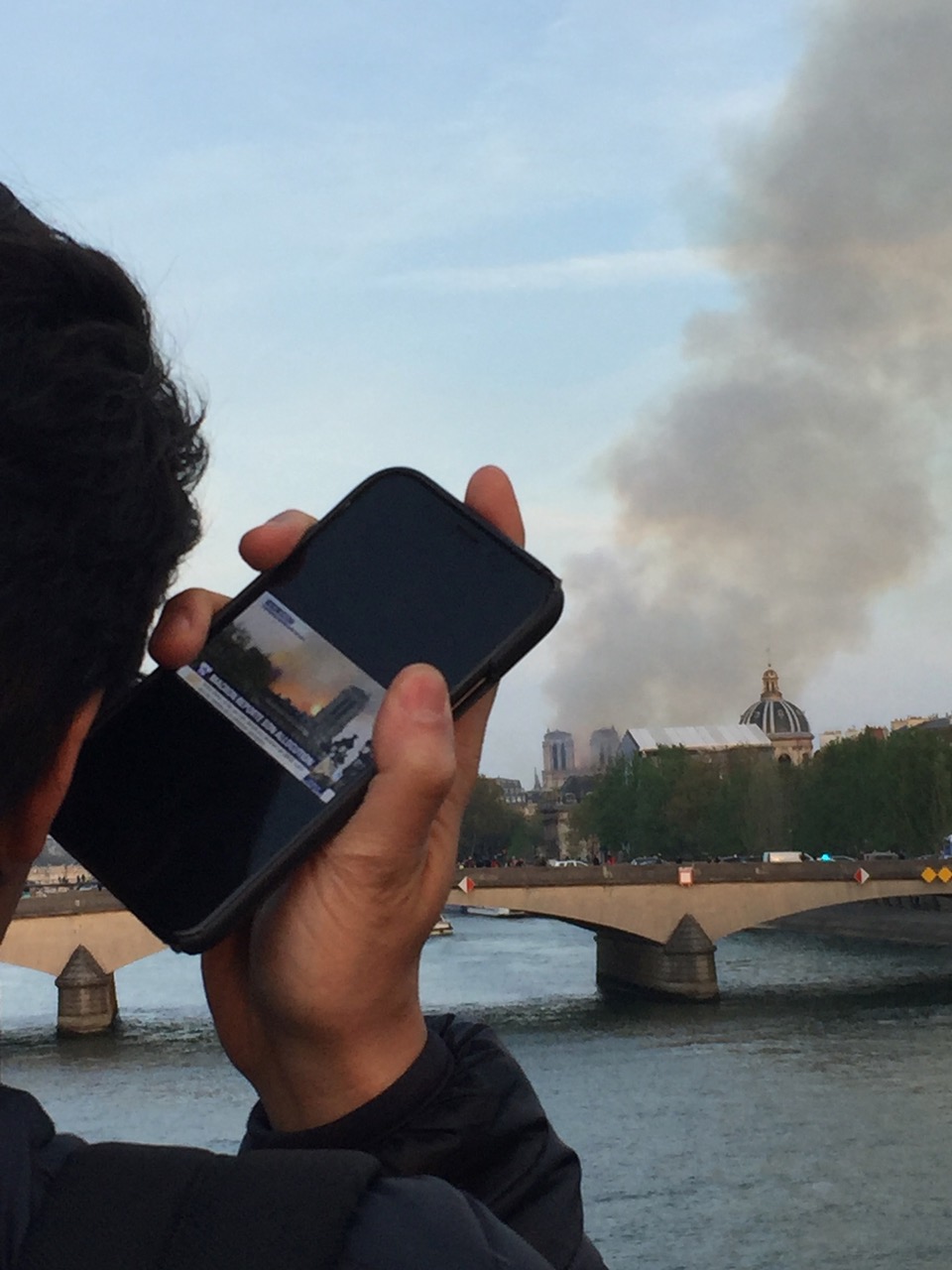 Capture the emotion and transmit it. © Anouk Bouvet, 2019.

Digital social networks are sounding boards for popular emotions and they rapidly relay major happenings. On the evening of 15 April 15 2019, news of the fire is disseminated around the world at an unprecedented rate. According to figures provided by Twitter, Facebook and Instagram, just over 3.3 million people generated 8.1 million messages containing content about Notre Dame. The sequences shot by Parisians have become as viral as the video of the distraught Stéphane Bern on France 2 TV news declaring, ‘A close friend is leaving us’. Accompanied by expressive emojis (faces crying, hands clasped in prayer, broken hearts, etc.), the messages display the whole gamut of emotional reactions: surprise, shock, disbelief, anguish and sadness. Some say they realize how lucky they are to have visited the cathedral before the tragedy, and to have photographs witnessing their presence there, while others express their fear that they will never have the chance to visit. Some express their support and admiration for the firefighters who struggle to overcome the flames. The texts are also full of quotes from Victor Hugo's novel that describe the monument or evoke the fire imagined by the nineteenth-century author. Hugo’s apparent premonition of a fire is powerful. Internet users mobilise popular iconography, including Disney images of the distraught Quasimodo and the melancholic Strix (Le Stryge), a horned demon conceived by Viollet-le-Duc and made famous by the talented engraver Charles Méron and photographer Charles Nègre. Screenshots of the game Assassin's Creed Unity are also used to circulate images of Quasimodo and the chimeras, but also Esmeralda, Marianne and the firemen of Paris. This intense moment of exchange is also marked by personal revelations: ‘This answers the question: What is heritage? Heritage is what we cry about when it disappears, even when it's a cathedral, and we're atheist leftists. #NotreDame’