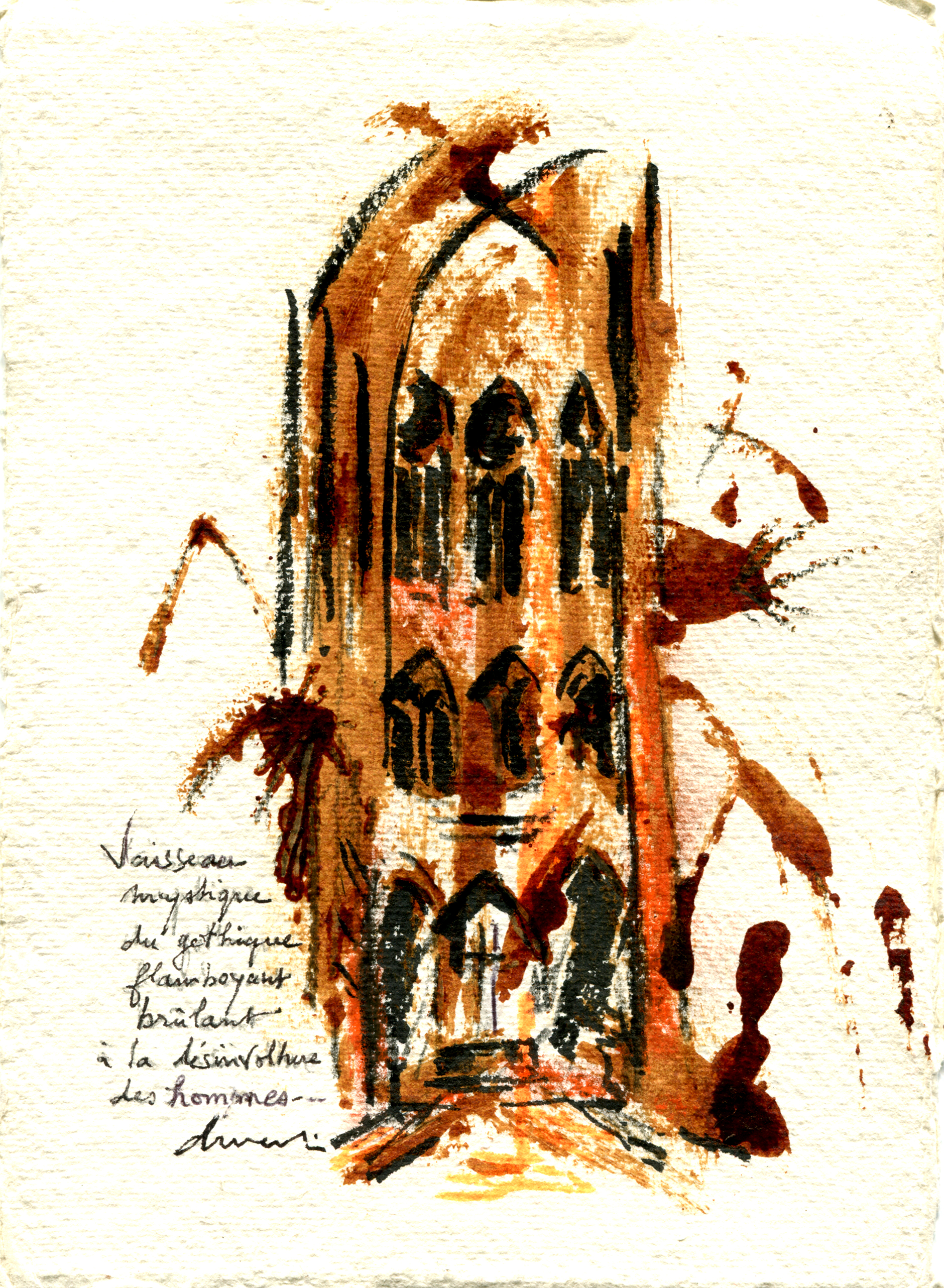 Everyone expressed dismay at the fire, as though driven by the need to express emotions and share them, but also to explain the strength of their feelings. Politicians, heritage professionals, scientists, intellectuals of all stripes, artists, journalists, and everyone on social networks and online media expressed their sadness, anger and amazement in a profusion of texts and testimonies that will go down in history as an archive. Everyone also made their own analysis in attempt to understand what Notre-Dame represented and to probe their own emotional connections to the monument.

We suddenly discover the hold of heritage and the idea that it must endure beyond our individual lifespans. One realizes that the catastrophe awakens an awareness of the fragility of human creations and, consequently, of our own insignificance and the finiteness of everything. Some people imagine the monument as the embodiment of France’s history and its historical and cultural continuity, as well as a place of temporal experience and of direct, embodied connection to the men and women of the past who left their mark there. Some others explore the way in which it is inscribed in biographical webs, in family memories, and its familiar presence. But everyone is astonished by the power of the emotion felt, but also by the way that the emotional outpouring is shared. Each community discovers that its heritage is also that of others: the Catholics discover that their heritage is shared by non-believers, and the French learn that the nation’s heritage is shared by the rest of the world.

Everyone also took a stand and gave their opinion regarding the restoration of the spire. Or regarding the donations for the restauration which highlighted, by contrast, the indifference of the richest, to other causes, social or ecological. All these words express the feeling that one cannot do just anything with Notre-Dame. They affirm that it is a common good, which everyone can claim to enjoy but also must share in the responsibility.

Listening to these voices and opinions means admitting that heritage is not only a matter for experts and professionals, but that it also belongs to everyone. It is therefore necessary to make space for multiple voices, to take seriously the expertise expressed by them, and thus to confirm that heritage is indeed a collective resource. 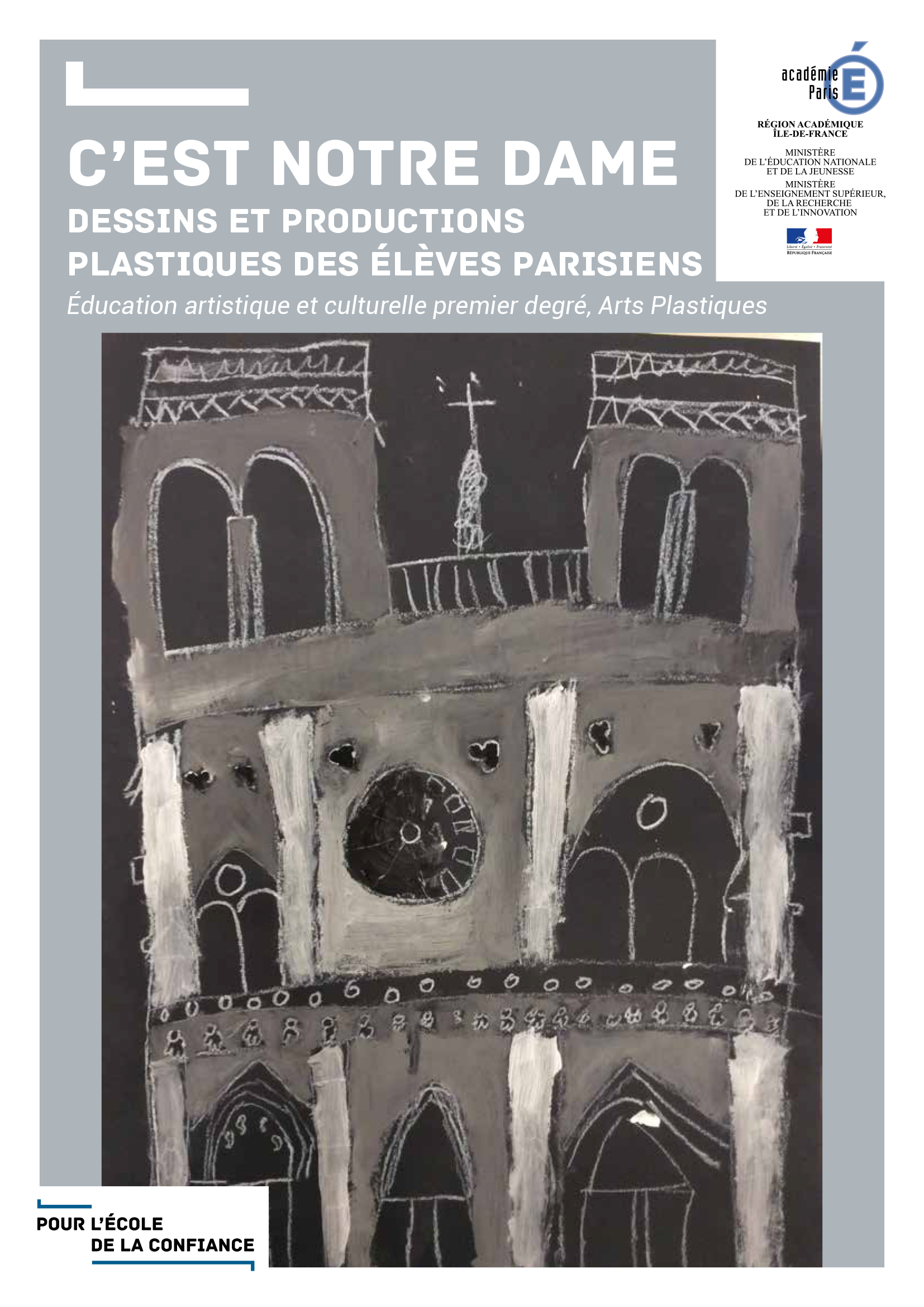 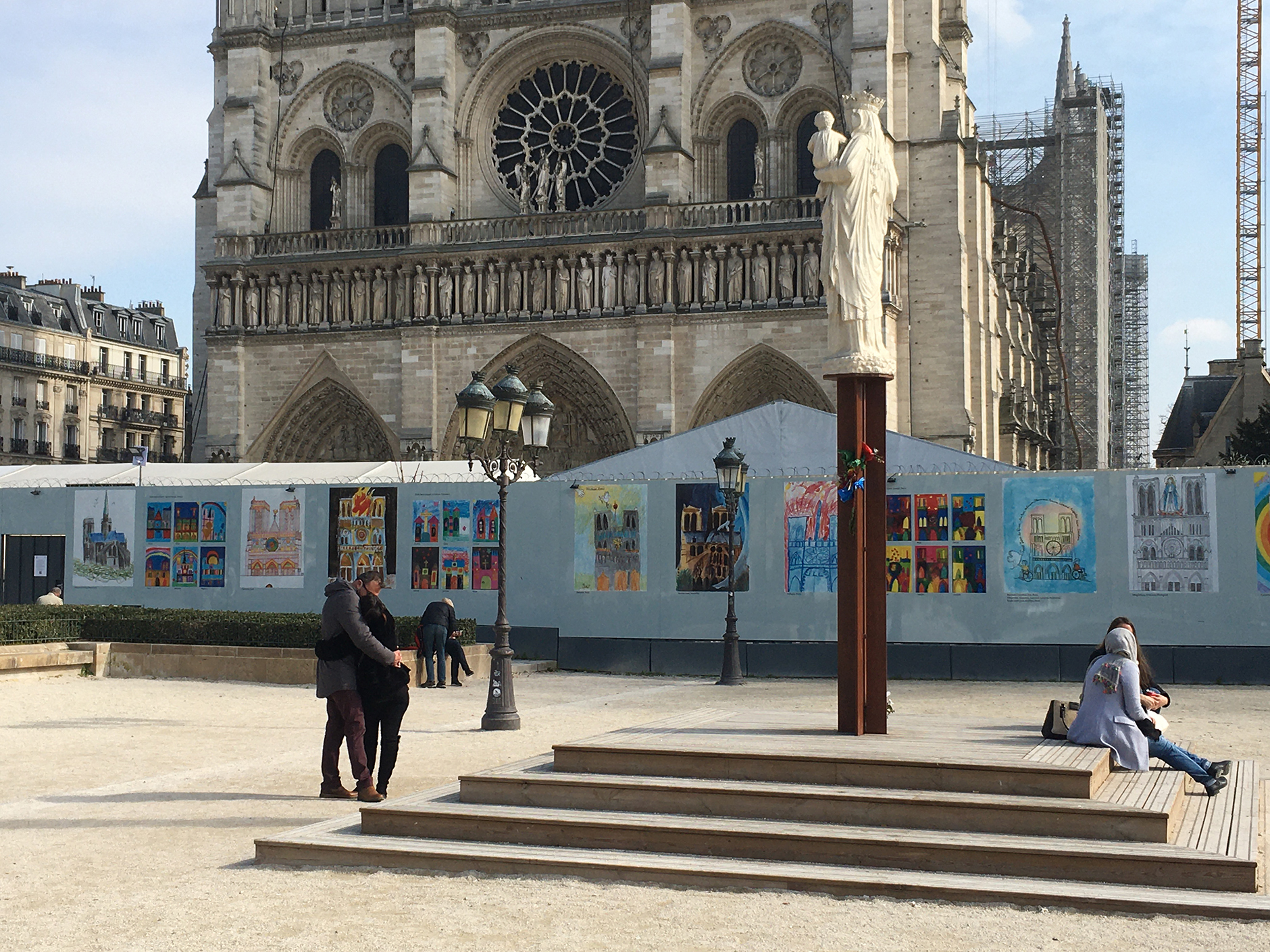 The "Draw me Notre-Dame" exhibition on the cathedral square. © Claudie Voisenat, mars 2021. 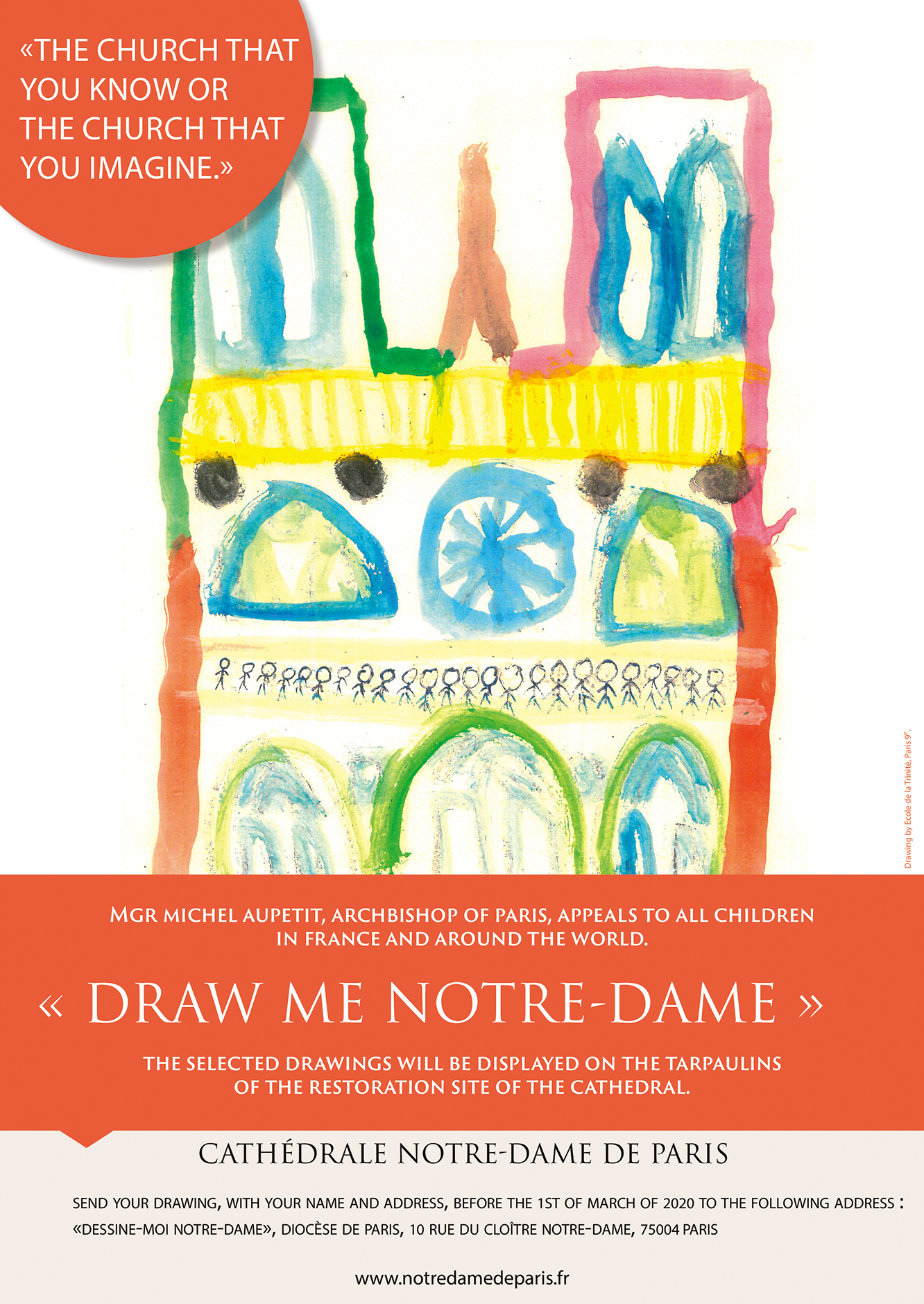 Imagination is at the heart of children’s expression and appropriation of Notre-Dame Cathedral, whether as historical symbol, ruin, resurrected monument, figures of doves, the Virgin Mary or Marianne. The city of Paris collected nearly 1500 drawings made by children aged three to eleven, and nearly 6000 others made by children between three and fourteen years old were received by the clergy. The participation of children from all over the world is a notable fact, marking the singularity of the testimonies and the scale of mobilization roused by the fire at Notre-Dame. At the same time, the exercise of drawing is part of children’s education about heritage and of a pedagogy of emotions.

In light of the strong reactions to the disaster, both the city's educational services and the religious authorities created projects for the production and collection of drawings on the theme of Notre-Dame. In the case of Parisian schools, the pedagogical challenge was clear: to use the practice of drawing as a means for children to express their creativity and emotions about the endangered monument. In order to reaffirm secular values, the educational program clearly favored historical and cultural approaches to the place rather than religious ones. Great French cultural and political figures connected to Notre-Dame de Paris were featured, including, of course, Victor Hugo, but also General de Gaulle at the time of the liberation of Paris at the end of the Second World War.

In the days following the fire, the ecclesiastical authorities received many drawings and expressions of affection of all kinds from children. These spontaneous contributions were interpreted as the most sincere expression of "the word of the People of God" and as metaphorical contribution to the rebuilding of the cathedral. In response, Archbishop Michel Aupetit of Paris announced at a press conference on 15 October 2019 the launch of a project to collect drawings entitled Draw Me Notre Dame. Catholic schools relayed this demand and hundreds of drawing were sent. 50 of these selected by the archbishopric are displayed in an exhibition on the square in front of Notre-Dame. 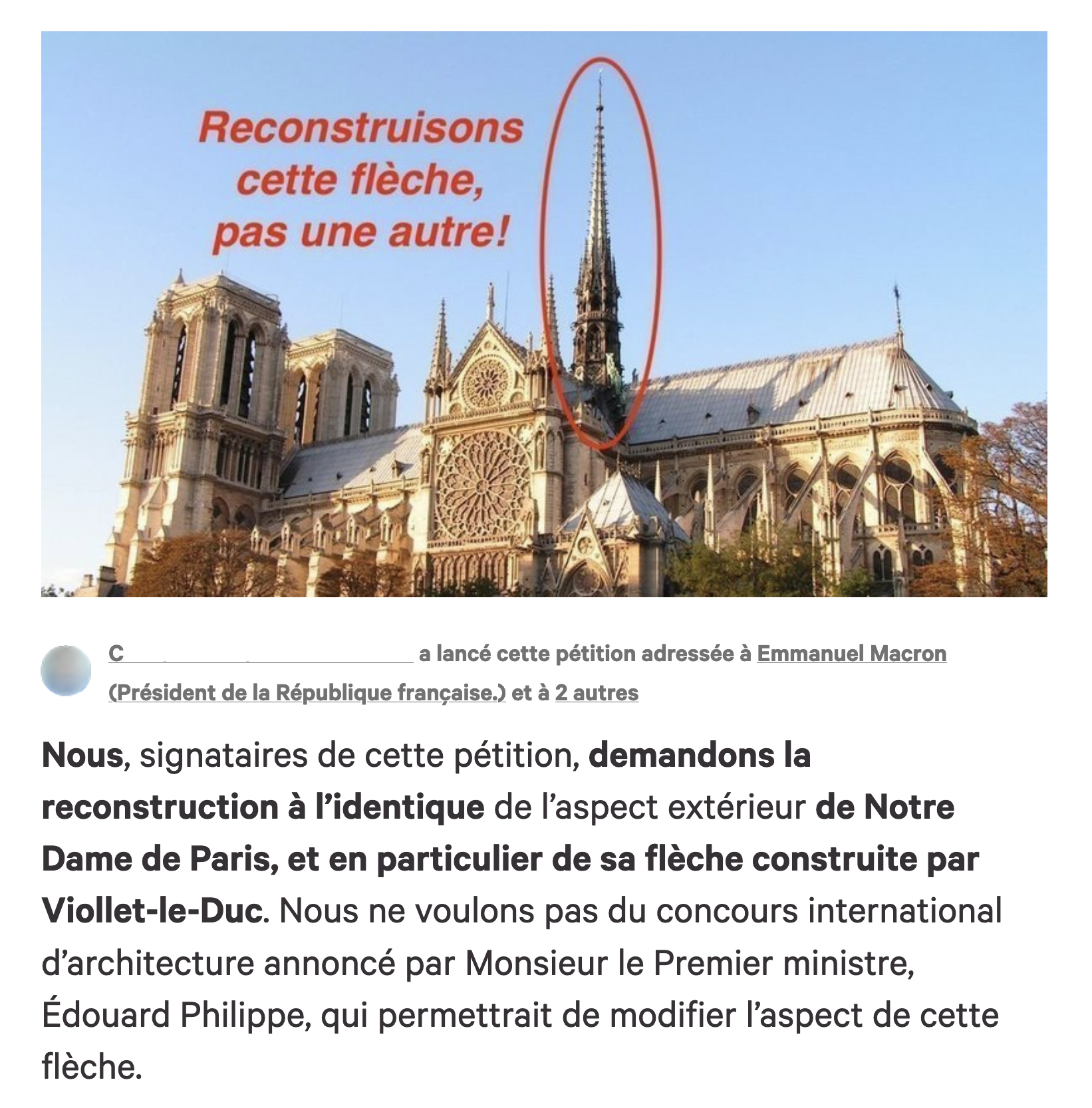 Petition for the reconstruction of the spire. © Photographie : mrugala.net. Annotation : CJSG. Change.org, 17 avril 2019.

In a context of growing social demands and desire to participate in political processes, the use of petitions has become a preferred way to express opinions. Thus, online petition platforms have been experiencing an unprecedented craze during the past few years. Easy to access, they offer everyone the opportunity to support a cause by creating or signing a petition. Social networks help to disseminate them and to lend greater visibility to the causes they promote. By giving voice to those who struggle to make their claims heard in the official media, petitions operate within a paradoxical framework: they offer a place for self-expression, which is necessary for the democratic process, but they also promote a ‘society of emotion’, in which the manipulation of individual and collective emotion often results in political disengagement. As the philosopher Jean-Paul Sartre reminded us, ‘The conscience that is moved is quite similar to the conscience that falls asleep.’

On 15 April, the first petitions were launched, initiating a large-scale movement. In the following days, dozens of petitions were sent from all over France and the world. There were more than 170 created in France alone. Just like the petitioners themselves, the issues addressed were highly diverse. The petitions pursued the interests of their authors, from LEGO lovers to history enthusiasts. They revealed the sensitivities of our modern world, in particular ecological issues. Several petitions, for example, protested against the felling of hundred-year-old oak trees needed for rebuilding the roof structure. Over the weeks, they came to reflect the polemics created by the government’s decisions regarding the restoration: while some petitioners supported the idea of a modern reconstruction, whether it would be a glass spire or a green roof, the vast majority demanded an identical reconstruction faithful to the original. Finally, given the volatile social context in France at the time with the Yellow Vests protests, some petitioners expressed outrage at the considerable sums collected for the cathedral’s restoration, which they would prefer to have seen directed to the most destitute. Several of these petitions demanded that a portion of the funds for the cathedral be shared with the homeless or victims of natural disasters around the world, thereby claiming a different kind of universality for the cathedral.