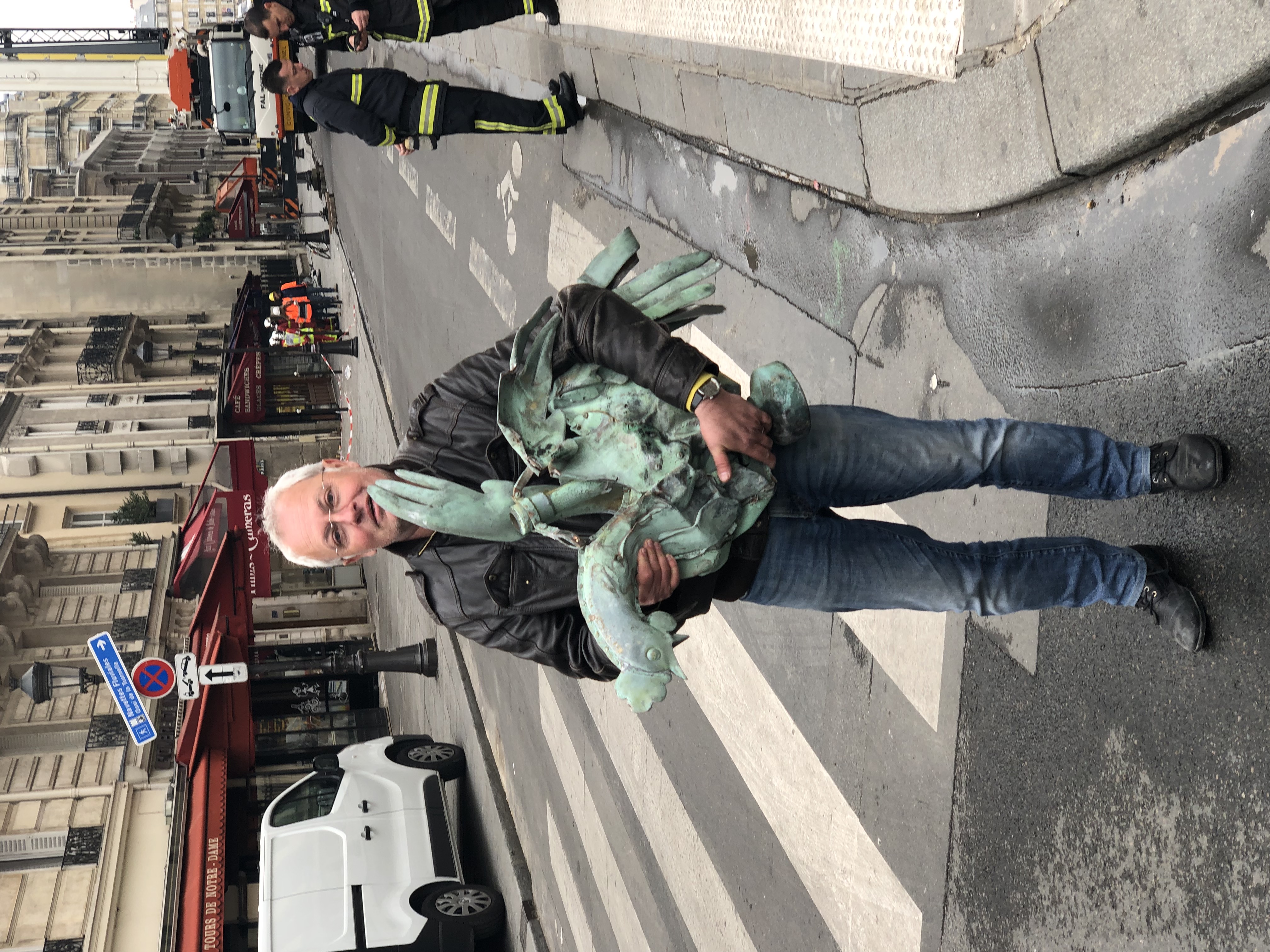 Philippe Villeneuve, the chief architect of historical monuments in charge of Notre-Dame de Paris, carrying in his arms the rooster of the spire, practically intact, which, against all odds, has just been found in the rubble. © Didier Durand, 16 avril 2019.

Among the objects saved from the Cathedral of Notre-Dame de Paris, the reliquary cock that had surmounted the spire is especially remarkable. Installed in the 19th century, this cock contains three relics: a thorn from the Crown of Thorns, a fragment of the body of Saint Genevieve (patroness of the City of Paris) and a fragment of the body of Saint Denis (patron of the Diocese of Paris). These relics are accompanied by an official document certifying their authenticity. After the fire, the rooster was discovered in the gardens of Notre-Dame by the architect responsible for the restoration of the cathedral. The relics were returned to the care of the Church, which now preserves them. The rooster, although badly damaged, was exhibited at the Ministry of Culture as part of the 2019 European Heritage Days. It is now on display at the Cité de l'architecture et du Patrimoine, along with the statues that were removed from the spire just before the fire. The fate of this object, which still bears the scars of its fall, is symptomatic of the strength of attachments to the building. Having been too badly damaged to be restored, the reliquary cockerel will not find a place at the top of the rebuilt spire. All those involved in the restoration view this artifact as an exemplary marker of memory of the fire. Meanwhile, another rooster will take the spot and the top the new spire.

Chapter 2  The Virgin of the Pillar 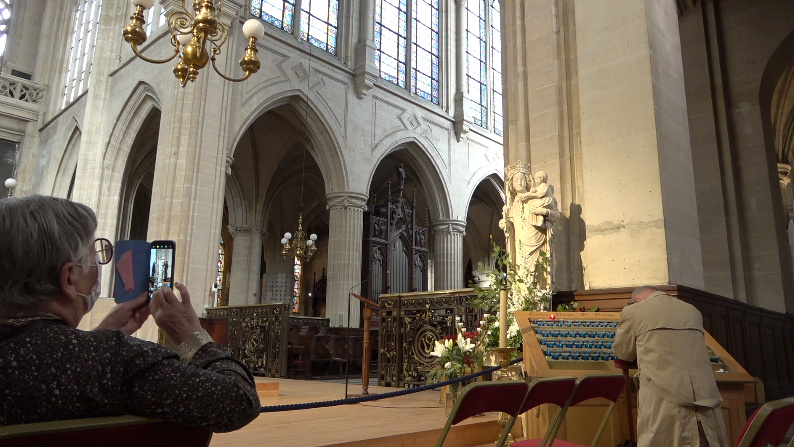 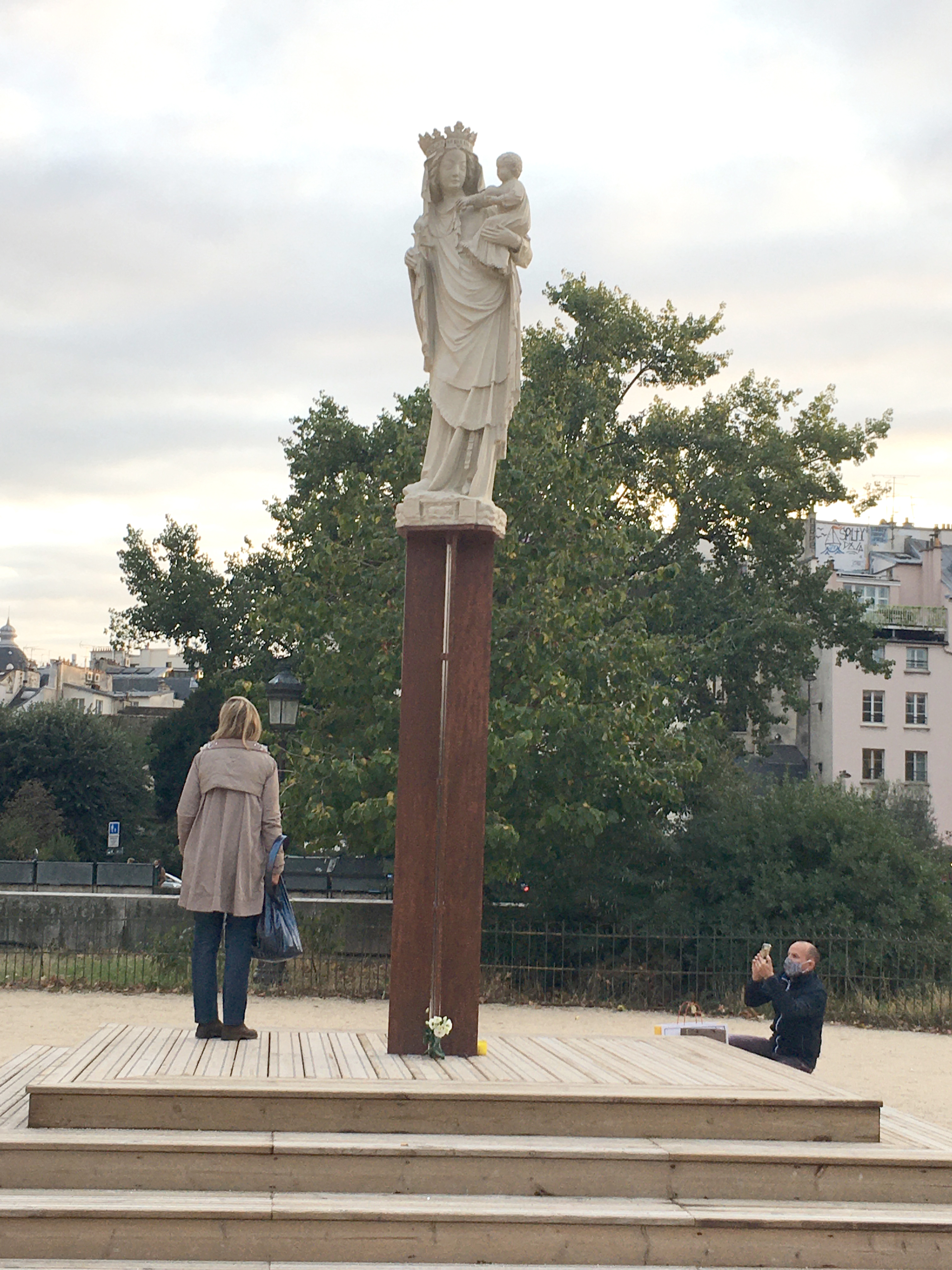 The resin double of the Virgin of the pillar on the square of the cathedral. © Claudie Voisenat, septembre 2020.

Traditionally at Notre-Dame Cathedral in Paris, each religious ceremony concludes with a prayer to the Virgin Mary. Like many religious images, the Virgin of the Pillar has a singular history. It was at her feet that nineteenth-century author Paul Claudel recounts to have received the revelation of his conversion to Christianity. On Christmas Eve in 1948, the image of the statue was broadcast at the opening of the first televised mass. The fire of 15 April 2019 added three new stages to the statue’s biography. Various accounts relate the rescue of the Virgin. All of them emphasize the remarkable fact that she did not suffer from the fire. It is even said that the water sprayed into the cathedral by the firemen made her even cleaner and brighter.
The fact that it remained intact amidst the rubble of the collapsed spire seems an almost miraculous sign underlined by the anecdote of the tiny piece of coal found on the foot of the infant Jesus, the only trace of the fire and a recall of the emotion felt at the discovery of the undamaged statue.

After the disaster, the statue was transferred to the church of Saint-Germain l'Auxerrois, opposite the Louvre Museum. At the same time, a copy was installed on the square in front of the cathedral. The duplication of the statue has cast doubt on its authenticity. Of course, the real Virgin of the Pillar is now preserved in Saint-Germain l'Auxerrois, where visitors come to contemplate it, such as a woman who travelled by bus to offer the Virgin a candle and to photograph her. But on the square of Notre-Dame, the copy of the statue is equally venerated. It was this second statue that was made the arrival point for a Christian march organized on 18 April 2021, marking the second anniversary of the fire.

Chapter 3  The Cross of Marc Couturier

The Cross by Marc Couturier, the Pietà by Nicolas Coustou (1723) and the statues of Louis XIII and Louis XIV, emerge intact from the rubble. © Alexis Komenda, C2RMF, mai 2019. 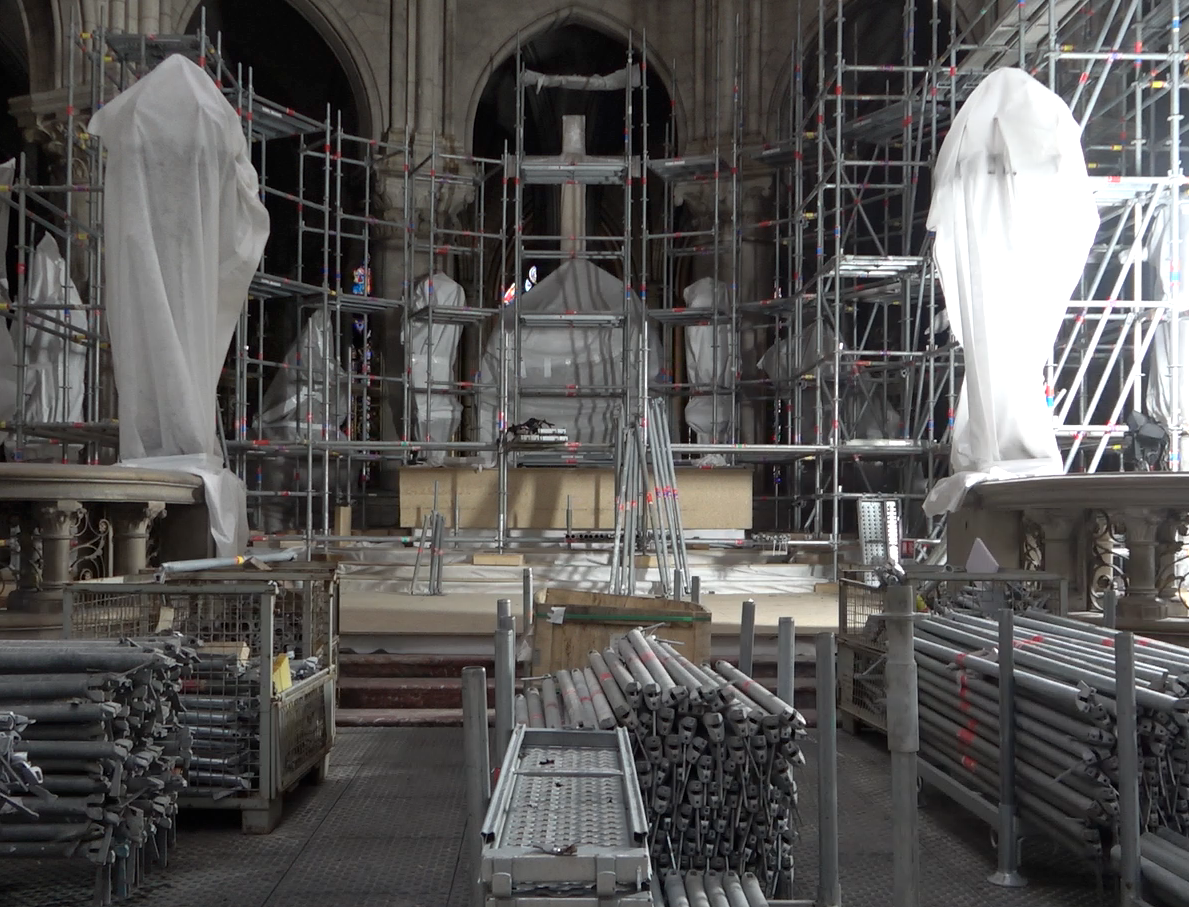 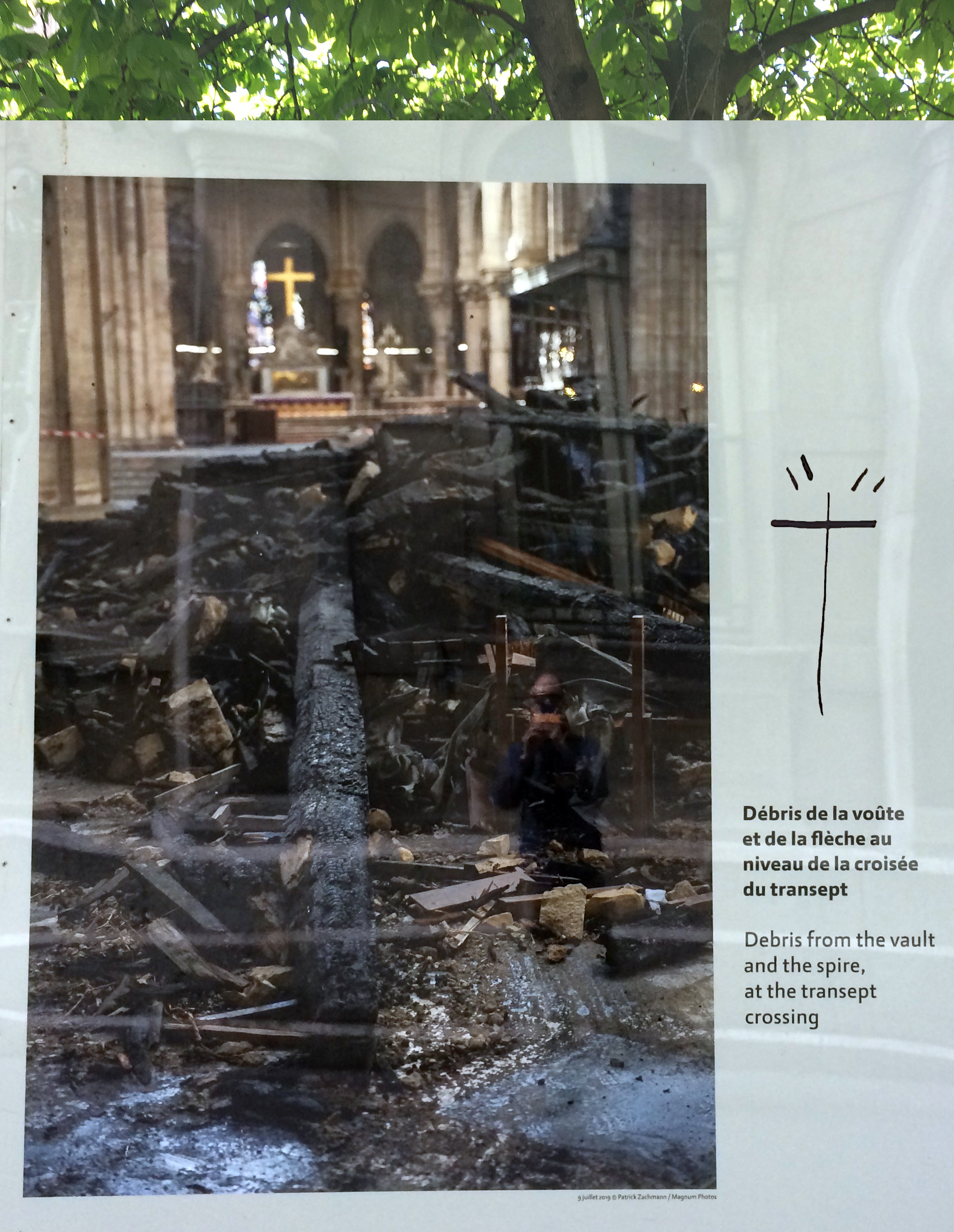 Photograph of the Cross of Marc Couturier overhanging the rubble; on the right a graffiti resumes cruciform, as if to heighten its brightness. © Gaspard Salatko, Fondation des Sciences du Patrimoine, janvier 2021.

Upon entering the stricken cathedral on the morning of 16 April 2019, the first witnesses discovered a contrasting image: a pile of charred stones and wood overhung by Marc Couturier's Golden Cross, sculpted in 1994. The contrast between this luminous cross and the rubble has been invested with singular meanings. Some have linked the fire to the punishment and redemption of an institution shaken by repeated scandals. This spiritual reading has sometimes been reinforced by a theological reading. For the day of the fire coincided with the start of Holy Week, which in Christianity marks the passion, crucifixion and resurrection of Christ.

Beyond their religious significance, these symbols were seen as an invitation to undertake the recovery of a cathedral that was not destroyed, but only wounded. Today, most of the cathedral's collections have been moved to other locations. However, Couturier's cross remains at the back of the choir, amidst the scaffolding and work, but carefully protected and therefore not presently visible. The public will have to wait for the reopening of the building to contemplate the Cross again, displayed in the background of the restored choir. In the meantime, a few discreet clues ensure its continued presence. On the fence that borders the north side of the building site, passers-by can admire – among other photographs of the rescue and the building site – the image of the Cross among the rubble. To the right of the image, a piece of graffiti repeats the cruciform motif surrounded by four expressive lines, as if to highlight and enhance its brilliance.

Chapter 4  The Crown of Thorns 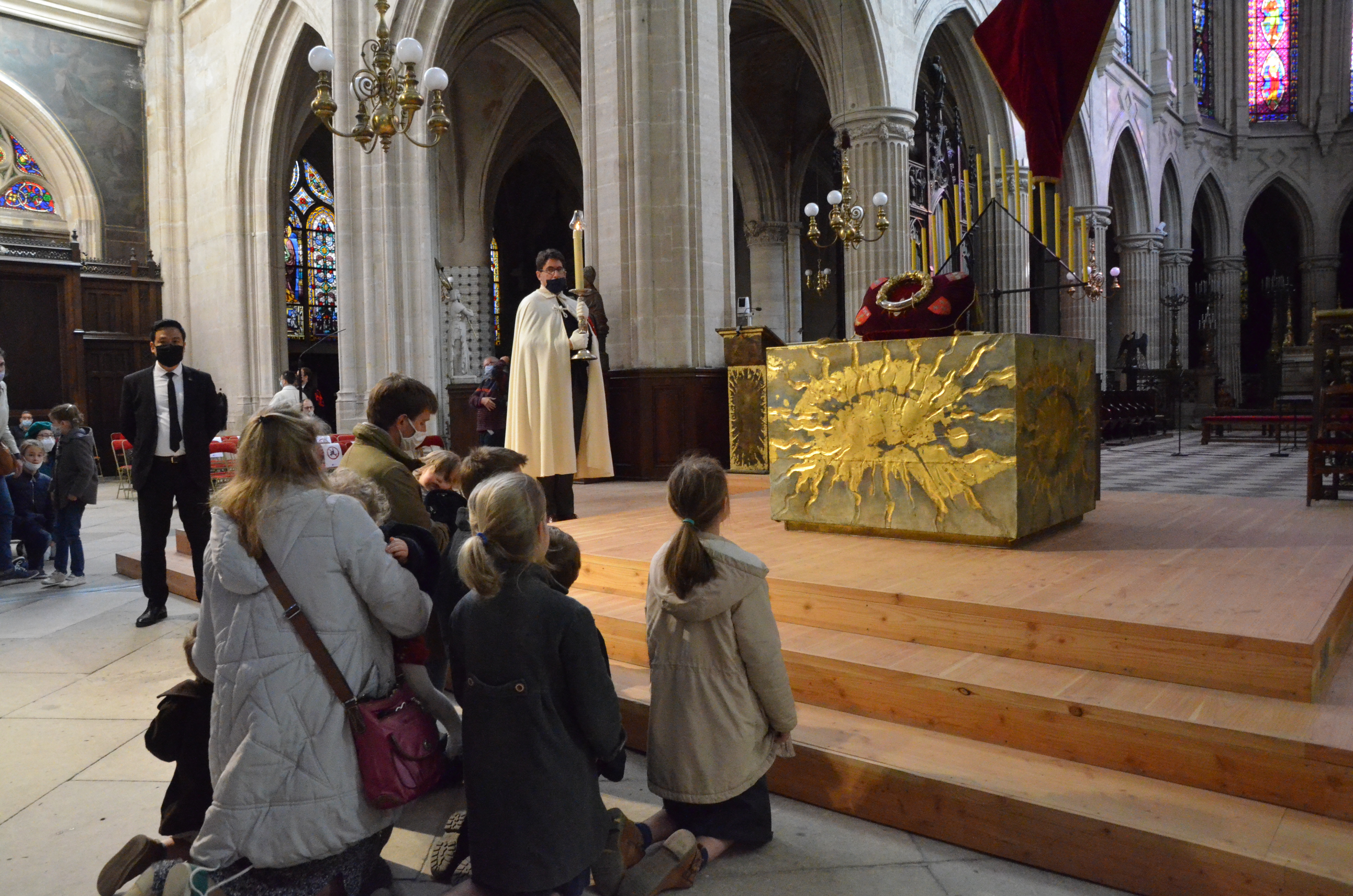 Ostension of the Crown of Thorns in the church of Saint-Germain l'Auxerrois on Good Friday, April 2, 2021. © Michel Pourny, avril 2021.

The jewel of the treasures in the Cathedral of Notre-Dame de Paris is the Crown of Thorns. This relic was venerated on the first Friday of each month under the care of the cathedral's officiants, accompanied by representatives of a lay brotherhood, known as the Knights of the Holy Sepulchre. Two types of practices can be distinguished: venerations and monstrances. The venerations involve tactile acts of devotion, whereby the Crown is touched and kissed. Monstrances are based on contemplation alone. It is the televised broadcast of the monstrances after mass that is said to have contributed to the international fame of the relic.

On the evening of the fire, people spontaneously showed up to help save the Crown of Thorns. In the emotional frenzy of the moment, several exchanges of text messages were necessary to find the code of the chest containing the relic. Firemen, cathedral staff, police officers and heritage curators formed a human chain to save the relic and the pieces of the treasure, and transport them to the nearby city hall while waiting for a secure storage in the Louvre Museum. Since then, there have been many requests to see the relic again. Yet the Crown has only been presented on rare occasions: at the church of Saint-Sulpice in the days following the fire, at the church of Saint-Germain l'Auxerrois in early March 2020, and during the Easter celebrations of 2020 and 2021. The rarity of these events is linked to the COVID-19 pandemic because the risk of contagion prohibits the veneration of the relic by physical contact. However, these restrictive measures are not as exceptional as one might think. Already in 2009–2010, the Crown was withdrawn from the veneration of the faithful because of the influenza A (H1N1).